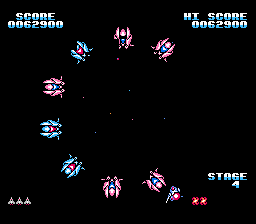 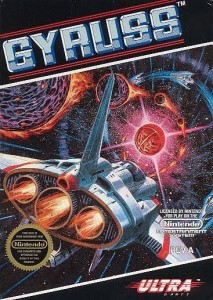 I’d say the game is as epic as the cover, but I have no idea what’s going on here. 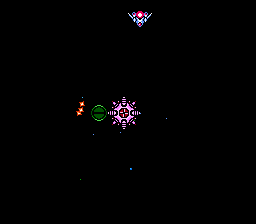 When I was younger, trips through the galaxy were never this chaotic and filled with death.

And with a hearty laser beam to the face, I declare the letter ‘G’ to be vanquished forevermore from my sight. Gyruss is Ultra a.k.a Konami’s 360-degree take on Galaga, one of my favorite shooters of all time. For those who do not like Galaga as much as I, I would recommend Gyruss as a replacement. Each level is still all about shooting as many enemies as quickly as possible as they fly in; if you don’t, they’ll dive bomb your ship with projectiles and eventually themselves. Once the enemies of the level are destroyed, you warp to the next level, just like Galaga. However, Gyruss strips away the “antiquated” early 80s feel, throws in some nifty space effects and adds a semblance of a plot structure. You progress from planet to planet in our solar system i.e. Neptune to Venus to Jupiter, etc. Each planet contains three levels. Instead of taking on each enemy from a fixed vertical position, you are able to move your ship in a continuous 360-degree fashion. Indeed, you have to if you want to defeat all of the enemies efficiently. The illusion of traveling through space may be the best of its kind for the NES. Honestly, it seems like you’re going at warp speed the entire time which can be a bit disorienting. The enemies’ projectiles can appear like stars or some other unimportant space dust, which left me destroyed on more than one occasion. As with Galaga, Gyruss starts to become difficult early on. With much time and care, however, one can conquer each level – nay, the entire solar system – and destroy all of the obtrusive space bugs that aren’t content to simply splatter on your view screen.
B
The following two tabs change content below.