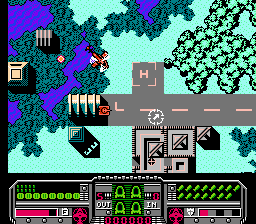 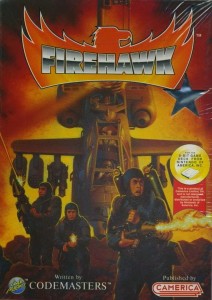 “Twin Peaks: Firehawk with Me,” starring Agent Dale Cooper as The Flamethrower Guy! 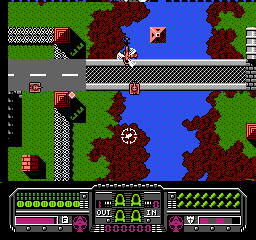 Even the water is evil in this game. Destroy it!

After playing through several Codemasters games and only really despising one of them (The Fantastic Adventures of Dizzy), I believe I can safely proclaim this edict: Codemasters was the best developer of unlicensed games for the NES. I know they don’t really have much competition other than maybe Tengen, but Codemasters has proven itself worthy, what with Bee 52, Dizzy the Adventurer, and now Firehawk, a-shoot-’em-all-and-let-God-sort-’em-out explosive playground. In Firehawk, you control a helicopter (presumably named “Firehawk”) and your goal is to destroy anything that shoots at you. The ‘A’ button is your traditional fire, with ‘B’ serving as your missiles. Missiles are good for the bigger things – bridges, tank holds, miscellaneous square things that shoot at you – while standard ammo will take out the little buggers. There’s usually only one or two goals in each of the seven stages, with the helicopter’s cross-hair directing you where to go. Rescuing your friends (or “paras” as they call them) is the other main part of the game. When you initiate a rescue sequence, the screen will show your helicopter rescuing the soldier, while behind the helicopter, other enemy helicopters attempt to take you out. Pressing ‘B’ will fire on helicopters to your left, while ‘A’ will take down ones on your right. It’s hard to explain, but incredibly fun in practice. Speaking of practice, the steering controls will take some getting used to. The helicopter can be unwieldy at first, but controlling it does become easier over time. For those that like Choplifter and the Strike series, Firehawk comes highly recommended.
A-
The following two tabs change content below.