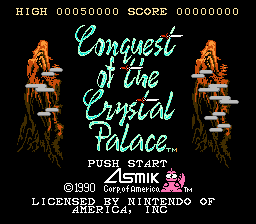 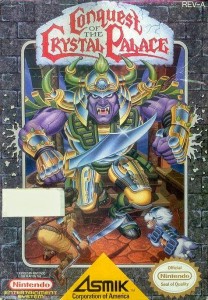 These grape monsters are the worst kind of party crashers.

It’s like if the movie “The Last Emperor” featured a quirky crime-fighting dog that talked.

Go on, read the title of this game aloud to yourself: Conquest of the Crystal Palace. Unless we’re talking “The Dark Crystal” and some Jim Henson’s Muppet action, all of which are inherently great, this game sounds like it could go one of two ways: the first is all the way to Generica, a land where average, mediocre, bland, and yes, generic games rule with a moderately-sized bronze fist. The second is to WTF Town, a place where truly bizarre, quirky, and downright awful games are applauded for their atrocities. Imagine my surprise and delight when Conquest… happened to reside in Forgotten City, a place where Adventures of Dino Riki, Bee 52, and other awesome unappreciated games reside. Conquest of the Crystal Palace is fun and I truly wasn’t expecting to write that.

Conquest of the Crystal Palace is a good ol’ fashioned Japanese side-scroller that goes out of its way to make as little sense as possible. You play a budding young samurai whose goal is to rescue the crystal princess from the Evil Bad Guy King who has taken her captive. Along the way, you must usurp him from the throne, so you and your German Shepherd can take your rightful place as King and King’s Dog respectively. At the outset of the game, you get to choose from one of three crystals that will give you extra powers. I chose the Spirit Crystal, which increased my attack power, but you can also choose from the Life Crystal or the Jump Crystal or even the Gangsta Cristal (not recommended if you easily have seizures). From there, you’re hacking up bats, golems, venus fly traps, monkeys with your crystal sword and collecting the money they drop. Occasionally, a girl will pop out of nowhere and offer you her goods. These goods, such as herbs, jump shoes, and dog whistles among others are essential for you to complete your journey. Like most Japanese side-scrollers, Conquest is ridiculously hard. Don’t get discouraged, though: like any challenging game worth its weight in crystals, Conquest’s levels are beatable, despite the many deaths you will face. That’s what continues are for, after all.

Perhaps it’s a cop-out to explain how Conquest of the Crystal Palace plays by comparing it to other games. Well, let’s get started! As far as difficulty goes, the closest game I can compare it to is Ninja Gaiden; the original, not the slightly watered-down sequel. Also, traversing across mountaintops and killing pattern-based creatures with a sword really screams Ninja Gaiden, though I will say your samurai doesn’t control as smoothly as Ryu. As far as the kooky Japanese feel, Conquest reminded me a lot of Clash at Demonhead. Conquest isn’t as over-the-top, but the plot is just as ludicrous as Clash’s. While Conquest is linear and Clash is not, in both games you need to buy items at the shops to progress, which isn’t a feature commonly found in side-scrolling action games.

Conquest… has so many neat characteristics that keep it fresh and endearing to this day. As you progress through outside levels, the time of day will change from day to dusk to night to sunrise. It’s surprising how effective this is in conveying the progression of your character. I also love when you call your dog with the dog whistle, and how he bounces around you, killing everything he sees. Perhaps my favorite feature of the whole game, though, is the continue screen. It’s a surprisingly dark image of an underground cavern, where your main character is tied to a rope, dangling above lava. He’s shaking, trying desperately to get free, while your canine companion barks on from the sidelines. Every time I ran out of lives and saw the image, I thought, Of course I’ll continue. I don’t want my little samurai buddy to die! That, friends, is some powerful persuasion that I don’t think I’ve seen in any game since I’ve began this quest. Good show, Conquest of the Crystal Palace. Good show indeed.