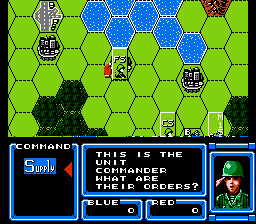 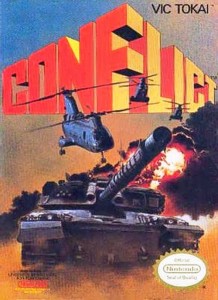 That’s quite the big milkshake you got there.

War: thanks to Edwin Starr, we all know it’s good for nothing. But Conflict, a generous turn-based strategy title, takes the bloody battles of war, removes the blood, and amplifies the fun! Sure, your troops may get wounded or die, but you – as the puppet master – will feel alive with power! Choose from one of fifteen different war scenarios, each with their own subtleties, quirks, and generic names like “Screaming Eagles,” or “The Link of Destruction.” Each scenario starts you with a combination of development factories, ground units, supply trucks, tanks, and air squadrons, like helicopters or fighter jets. The goal is to capture cities and airstrips around the map to gain Fame Points, while simultaneously destroying the enemy troops (the latter depletes their Fame Points, which always start off higher than yours). With Fame Points, you can produce more units in your factories. The less Fame Points you have, the less damage you’ll be able to dole out. Battling occurs when one unit sidles up next to the other. Look at the screen to note which direction your unit is facing againt the enemy’s unit. Sometimes you’ll have to turn to face them to be able to attack. If you defend yourself and run away – which, frankly, you’ll need to do sometimes – be aware that this will deplete your Fame Points. And, for obvious reasons, don’t let your weaker units come into contact with the enemy’s stronger ones i.e. infantry against tanks, supply units against fighter planes, etc. Not every scenario is strategic gold, but Conflict has more than enough depth and replay value to satisfy most blood-thirsty war-mongers.
B
The following two tabs change content below.