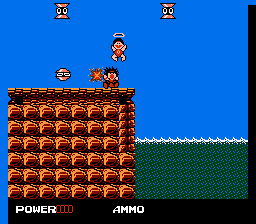 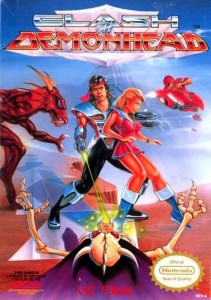 I must – nay, need – to see an animated film adaptation of this game. 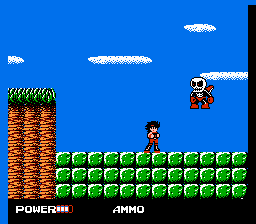 “May I have this dance!”

As I played Clash at Demonhead, I knew I was experiencing something special. Within the first five minutes, the over-the-top story, exaggerated animation, and clever translation/dialogue convinced me that this game succeeded at being different and quirky. I also realized that Clash at Demonhead was going to take a deeper playthrough than most of the games I play, in order to determine how successful said quirkiness was pulled off. The game is non-linear, Metroid-style, and there is no clear sense of where you’re supposed to go. Normally – Metroid and Zelda 1 aside – non-linear NES games are tedious and frustrating to me (see Castlevania II), but Clash at Demonhead pulls off its “multiple routes” gameplay fairly well. What I’m trying to determine – even as I’m currently writing this – is whether I truly enjoyed my time with the game. Yes, it was goofy, clever, and interesting, but I still can’t decide if it was fun.

Clash at Demonhead has a fairly large cult following, so I can understand if that last sentence reads like something blasphemous. Allow me to explain: the routes – or “levels” as they’re called in other games – are bland, non-descript and uninteresting. Many of the routes resemble each other in structure and enemy placement, and progressing from route to route is, sadly, a little boring. Yes, certain levels are made more interesting if you know what items or weapons you’re supposed to have. For example, in Route 5, knowing you need the Aqualung to swim under the water to get to an underground cave, where there’s loads of hearts and gold bars waiting for you is pretty cool… if you know that. To be fair, there is some variety encountered here and there: NPC’s actually give you valuable information regarding different routes, so it’s nice to run into them. Bosses, too, when encountered are challenging and fun. For the most part, though, you’ll be traversing back and forth through the same routes trying to get enough money to buy the different parts that you need to progress past later routes.

What appeals to me about Clash at Demonhead, however, is the overwhelming Japanese-ness of the presentation. Your character is a secret agent and his name is Billy “Big Bang” Blitz! When you have conversations with anyone, two dialogue bubbles are separated by the words “Talking Time.” Every conversation, even with NPC’s, includes exaggerated facial animation. The main villain’s name is Tom Guycot, and he’s the Chief of Seven Governors; he’s also a skeleton. When you shoot NPC’s they yell out “NO!” repeatedly but continue to walk in your vicinity, which made me want to shoot them all the more. When you die, your character freaks out and his spirit turns into a sumo baby angel and flies away. Instead of dying when you fall off of a ledge, you get transported to an underworld swarming with creatures. If you make it to the exit, you’ll be transported back to the main map.

Does the excellent presentation cancel out the average gameplay? I think so, and I think that if I actually completed the entire game, I might have a different opinion of the gameplay. I’ve read several different positive reviews of the game and the majority of the reviewers say that it takes time to adapt to the game’s style of play. Perhaps. Even if I never found the gameplay of Clash at Demonhead intriguing, though, it’s a game I would play through completely just to see what happens to Billy “Big Bang” Blitz and Professor Plum’s atomic bomb and Tom Guycot, Chief of Seven Governors. Many gamers say that style and presentation are not enough to overshadow shallow, simplistic gameplay. I disagree.