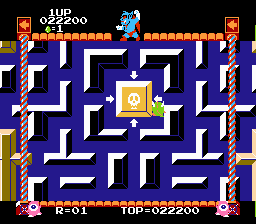 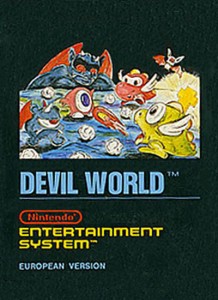 The fate of the world rests on a goofy green dragon.

Devil World has the fantastic distinction of being the only Shigeru Miyamoto designed game never released in the States. Chalk it up to Nintendo of America’s paranoia during the Reagen era. They reasoned that the sight of crosses, Bibles and a dancing blue Satan in a “children’s” arcade game would invoke the ire of millions of conservative Christian parents. The sad part is, NoA was probably right. Devil World was released in 1984 in Japan for the Famicom, and likely would have been a launch or near-launch title for the NES in 1985. Nintendo was trying to launch a new gaming console in a country that seemed to no longer have interest in video games, and they needed as much public support as they could get. Even though Devil World is an innocuous Pac-Man interpretation, it still behooved Nintendo to tread lightly in America.
In Devil World, you control Tamagon, a green dragon who, for one reason or another, decides to go after the devil himself. There are two mazes per stage. The first maze has Tamagon collecting large crosses in order to gather all of the pellets scattered around the maze. Without the cross in hand, you can neither collect the pellets nor protect yourself from the pink dragons. In the second maze, you gather a Bible located in each corner of the screen. The Bibles are used to seal up a large skull-emblazoned square in the center of the maze. Once you do this, the devil ceases his dancing, turns into a bat, and flies off. This is followed by a bonus round where you collect pamphlets (tracts?) for points. Each stage is essentially the same, and as far as I know, the stages will repeat themselves until you lose all of your lives. 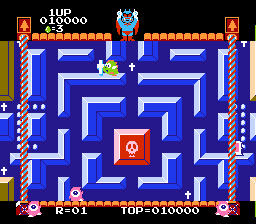 The devil’s speedos lessen whatever amount of fear he’s trying to provoke in his subjects.
What distinguishes Devil World from Pac-Man is how the devil moves the screen. While you’re trying to collect all the pellets or Bibles, the screen is moving up, down, left or right, depending upon the direction the devil’s pointing. The constant movement is disorienting at first, but as you go about your business, you start to pick up the rhythm. Note: it is possible to get squashed as the screen scrolls along, and the scrolling speeds up the deeper you get into the game.
Devil World wasn’t worth the inevitable backlash Nintendo would have received for it, but it should be noted that the game doesn’t promote Satanism in any way. If anything, it promotes the goodness of Christian iconography. A representation of God or Christ is nowhere to be found (a wise decision on their part), but the idea that crosses and Bibles put an end to the devil’s antics is far more generous to the Christian faith than, say, any Wisdom Tree game. Devil World is certainly more intriguing as a historical footnote than a game (it’s solid B-tier Nintendo), but anyone who wants to delve deeper into Nintendo’s Japan-only works should seek it out. And by seek it out, I mean download it. It’s still not available in the States in any form.
B-
The following two tabs change content below.