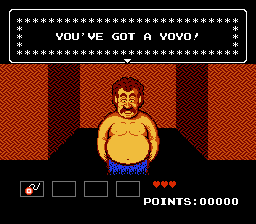 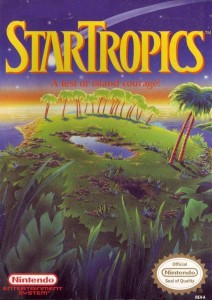 Such an evocative cover.

StarTropics starts off as an all-American take on the original Legend of Zelda before blossoming into its own brand of adventure funk. You are Mike Jones, a “teenage star pitcher” who wields a yo-yo. Explore and conquer dozens of island caves, while searching for your archaeologist uncle, Dr. Jones (also known as Doctah Jones!). Indeed, the story of StarTropics couldn’t be less riveting. None of the islanders are funny or interesting, and Mike as a character is as boring as apple pie sans ice cream. It’s the dungeon exploration that keeps the game alive. Like Zelda, you can only deal with one room of each dungeon at a time. You have to kill every enemy in the room or step on specific green blocks to open up the path to the next room. These green blocks are crucial to the game. While you can jump on any of the blocks, only certain ones will reveal hidden necessary items or secret doors. It sounds strange to say, particularly if you’ve never played StarTropics, but jumping from block to block to unlock secrets is incredibly fun, and a key to the game’s success.
Less so the combat. Mike controls very rigidly (much more so than Link), and his yo-yo is a pathetic weapon (until it’s upgraded in Chapter 3). You can acquire secondary weapons, like baseball bats, bolas, slingshots, but they’re of few quantities. Many of the enemies are able to move in all directions, yet Mike is limited to four. Isn’t he an all-star pitcher? He should be agile! Limber! Wobble-tastic! He can jump, which is useful for avoiding projectiles, but that’s the game’s only concession for his clunky movements. 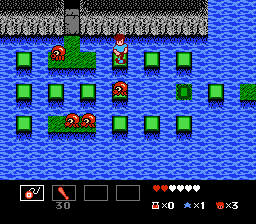 How is Mike gonna get out of this one?*
After a fairly easy start, the difficulty ramps up to ridiculous proportions. In a dungeon, if you die in any room, you’re thrust back to the beginning. This is par for the course, and very Zelda-like in structure. In Zelda, however, few, if any of the dungeons had rooms where you could be killed in one-hit. Enemies would take off half of a heart to a full heart, but all of your life? Even Ganon’s not that cruel. In StarTropics, there are an overabundance of one-hit kill rooms, thanks to the water or lava found there. If Mike jumps or lands in either of these liquids, he’s dead. You won’t go out of your way to jump into water or lava, but later dungeons are often structured around them. Makes sense, as the game takes place on a series of islands, but couldn’t Mike just lose one heart, like in Zelda? Couple the one-hit deaths with increasingly obnoxious enemies (the mummies that take a thousand hits!) and you have a difficulty spike that’s both jarring and unnecessary.
Despite StarTropics’ problems, it’s still a unique spin on a Zelda-style dungeon crawler. Very few companies other than Nintendo could make a game teeming with flaws, and still have the overall package be worth experiencing. Any self-respecting retro gamer should seek it out.
B
*My sincere thanks to VGMuseum.com for the screenshots.
The following two tabs change content below.