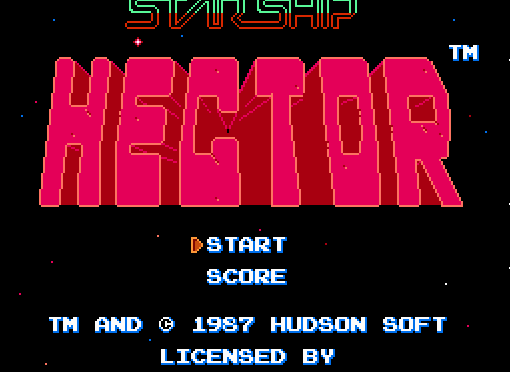 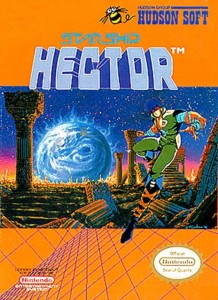 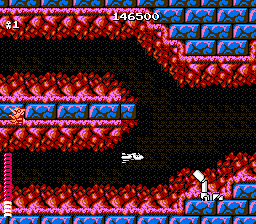 On the surface of an alien tongue. Mind the extravagant papillae.

For a game that may or may not have been named after Hudson Soft’s fifty-eight year old accountant*, Starship Hector is quite the difficult shoot-em-up. From the first level, you alternate between two playing fields a la Xevious. Shoot your lasers with ‘A’ to bring down the airborne enemies, and bomb the earth with ‘B’ to nuke the ground enemies. The bombs are slower to shoot, but better to take out the ground enemies first. They are always more plentiful and they spit hot fire at a quicker rate than the airborne enemies. Plus, your lasers take about three hits to kill the air enemies, while your bombs are one-hit kills. Hector also alternates between vertical and horizontal levels, like Life Force. The levels in Hector aren’t long or substantial enough to warrant this shift, and thus, the switch in play styles feels jarring (unlike Life Force, where every level was its own mind-blowing adventure). The good ship Hector has a life bar (unusual for any shmup), but it only takes a couple stray projectiles to bring it down to pittance; one solid crash into an enemy will take you out completely. The game doesn’t give you any power-ups, which is one of its biggest flaws. What good is a shmup without upgrades? God knows U.S.S. Hector could use some extra firepower as early as level 2. Generic level designs are the other complaint, though the intense, white-knuckle gameplay allows you to (mostly) ignore them. Starship Hector, like the potential accountant in question, is unassuming, competent, and gets the job done without being a showoff. Sometimes, that’s all it takes to satisfy.
B-
*Questicle.net has no knowledge of any of Hudson Soft’s accountants, and admits that inputting such information into the review was for structural purposes.
The following two tabs change content below.