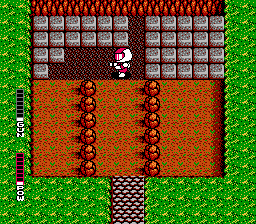 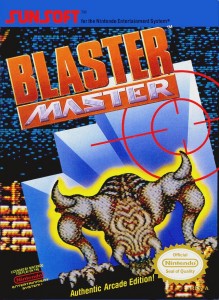 Why aim at the monster, when the Tetris piece behind him is far more threatening? 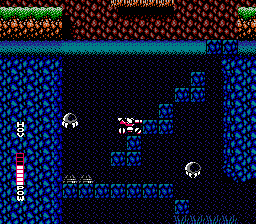 Does Nintendo know about this?!

Two highly acclaimed NES games in a row?! Surely this streak will end tomorrow when I try to care about The Blue Marlin. Anywho, I’ve master blasted my way through some games in my time, but never Blaster Master. When I was really young and lacked any knowledge of gaming magazines, I only had the game covers at the video store to inform me whether the game was good or not. Blaster Master had a bland, crappy cover featuring a mix of Eighties-riffic art and a pixelated monster (see above) that did not intrigue my young self. Once again, I find myself at age twenty-five playing beloved NES games for the first time. Since Bionic Commando was such a smash hit in my eyes, I dared to believe Blaster Master would blast my mast off. Alas, my mast remains.

The game starts out promising enough. You play as a spunky robo-boy who pilots a tank in order to save his beloved pet frog. STAY WITH ME NOW, THINGS GET COMPLICATED! The game is divided into two segments: the main portion where you drive the tank around a large pseudo-non-linear world and destroy baddies; and the secondary portion where you guide the robo-boy into caves or other random dwellings where the tank can’t go… and destroy baddies. The combination of both styles should be entertaining, but Sunsoft manages to make things dull, or at best, slightly above average. It’s fun to destroy things with a tank at first, but the levels’ layouts are boring. There are only so many places you can go, and none of them give you a sense of discovery and wonder found in a game like Metroid (a game Blaster Master copies, to some extent). Playing as the boy is, again, ok at first, until you realize the dwellings you enter usually exist only to give you power-ups; many of which are not necessary to your survival, and thus, pointless. Unfortunately, there are one or two places you enter per level that are important, as boss fights are sometimes fought there, so you have to enter all of them.

Some other general complaints: the game starts off really easy and accelerates to hard by the second or third area. I’m aware that, since most developers were just figuring out how these “video game things” worked in 1988, they didn’t always manage difficulty properly. Still, a little easing into the harder areas would have been nice. The game repeats backgrounds a lot. Often I wondered if Blaster Master (or BM as I will affectionately refer to it from now on) was laughing at me as I continued jumping up these never ending castle platforms in Area 2, and then I reached the top and discovered it was just part of the sloppy programming. There are a good number of enemies who, if they are in the ground in front of you and you are in your tank, you won’t be able to shoot them. I suppose you could exit out of the tank and shoot them with your little man, but that would grow wearisome. And if there’s one thing I don’t want from my BM, it’s to grow wearisome while attempting to master it.

I dunno. Some people swear by this game, others are like me and think it’s overrated. Truthfully, Sunsoft made some pretty boss games for the Nintendo era (Batman anyone?), so I expected better of this game. The story doesn’t help either: why would I want to hunt down a robo- boy’s pet frog across worlds filled with creatures that only desire my pain and suffering? How about saving a girl or the world from evil? These things are potentially worth fighting for, depending on one’s point of view towards humanity. But when one can walk outside during a thick rain and find a replacement for your best friend, well, perhaps Little Johnny should have kept the tank gassed up in the garage until a worthier cause came along.