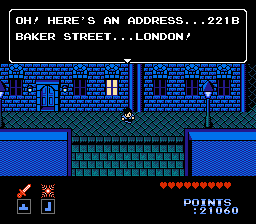 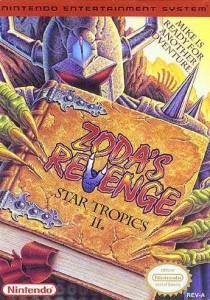 Zoda, at his book signing. “To Mike: Deadest Wishes! MWAHAHAHAH!”

Mike, the innocuous, yo-yo lovin’, all-American blank slate returns for more island hopping in the sequel to Star Tropics. This time, Mike travels through time to rescue seven Tetris pieces (labeled ‘tetrads’) and stop the clones of Zoda, the final boss from the first game. The original Star Tropics was Nintendo injecting a few summer cocktails in the Zelda formula: it was light, refreshing, and didn’t take itself too seriously. Zoda’s Revenge continues this tradition. Mike’s interaction with historical figures like Cleopatra (who won’t help Mike until he brings her a pizza), Sherlock Holmes, and Leonardo DaVinci are ridiculous and occasionally hilarious. The core gameplay remains dungeon exploration, though again, the dungeons feel like simpler (and yes, lesser) Zelda creations. Most rooms involve killing creatures in order to open up the next room, while avoiding dark pits and spikes (the chasms are one-hit kills – jump wisely); puzzles are more rare, though there are a few sprinkled throughout. Mike is no longer the rogue yo-yo slinger he once was, either. He starts his journey with an axe before upgrading to a dagger and katana later in the game. He also learns a psychic ability from a monkey in Egypt, which gets strengthened via a donkey in the Old West and Merlin in Camelot; almost Earthbound-esque, in its way. 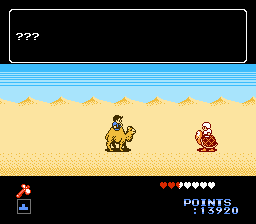 When worlds collide.
Quirky humor aside, Star Tropics isn’t one of Nintendo’s strongest series, which is probably why it hasn’t seen another game in twenty years. The historical locales are a nice change from the repetitive islands in the first game, but even still, there’s only so many times one can kill enemies to open up rooms. While Zelda was able to expand upon its dungeon exploration formula in later entries, Zoda’s Revenge‘s dungeons never exceed the boundaries set by the original Legend of Zelda. That being said, there are far worse games to steal from, and Zoda’s Revenge injects enough of its own personality between dungeons to remain compelling throughout. Our paths may never cross again, Mike, but… we’ll always have yo-yos.
B
The following two tabs change content below.