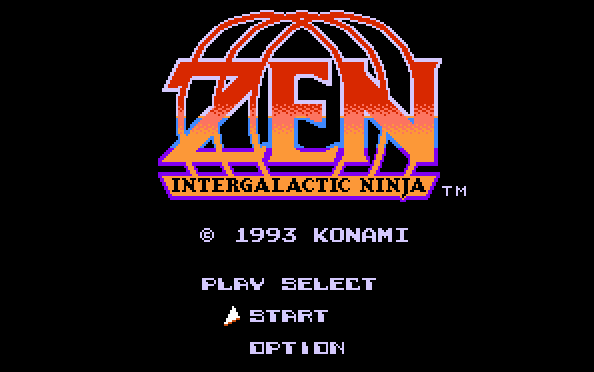 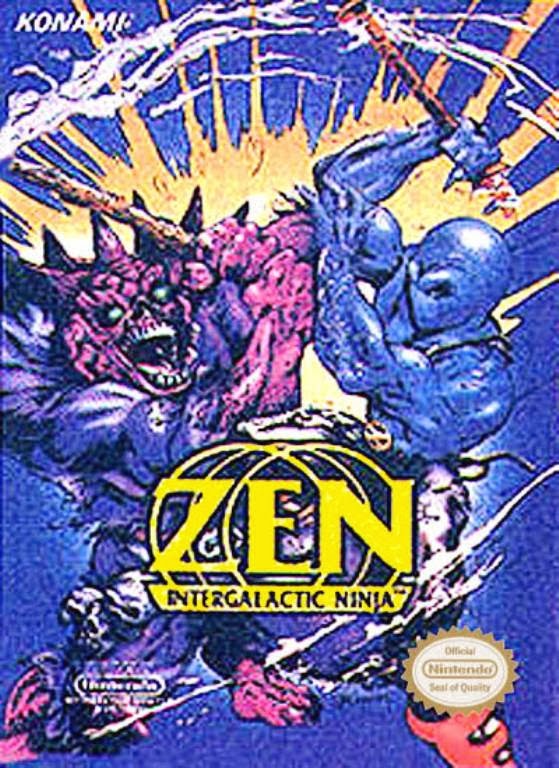 Does Zen have a black hole for legs? 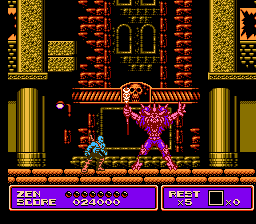 Zen the Intergalactic Ninja reminds me of a beefier Donatello (complete with bo) and a stereotypical alien head. Though Zen originates from his own cult comic series, Konami – the makers of every 8-bit Turtles game – are the brains behind Zen’s NES adventures. Far from being just another mindless beat-em-up, Konami wrings a surprising amount of variety from the blue beef tank. In the Oil Rig level, you rescue people trapped in a burning building. Collect fire extinguishers and put out the fires, while avoiding stray flames and living oil slicks. In the Forest level, you destroy clouds that are unleashing acid rain on flowers. Beat the flowers back to life with your staff (!), then jump up past the trees to do battle with the evil Sulfura. The more flowers that are alive (as shown in the upper left corner of the screen), the less life you’ll lose as you fight Sulfura. All in a day’s work for the intergalactic ninja.
Sulfura is but one of many environmentally-themed, “Captain Planet”-esque bosses you’ll fight. In fact, the second half of the game is comprised mostly of boss battles. It’s a shame, then, that Zen isn’t a better fighter. His bo staff is his one and only attack, and while it is powerful, it’s also slow. Zen controls well enough, but he’s not as agile as his pals the Turtles. Be prepared for frustration when you’re jumping precariously over holes or bosses’ attacks. And for how ripply Zen’s muscles are, he takes beatings like a freshman. Don’t be fooled by the size of his life bar. The sensitive hit detection will drain it like water through a colander
In truth, I admire the effort Konami put into Zen: Intergalactic Ninja more than I enjoy the game itself. The graphics and animation are top-notch, the music is quintessential chip tune, but the gameplay never settles into a groove. Konami’s decision to make every stage different (similar, in some ways, to Battletoads) is laudable, but the game lacks a distinct identity as a result. Zen challenged and surprised me, but never in the way I wished it would.
C+
The following two tabs change content below.