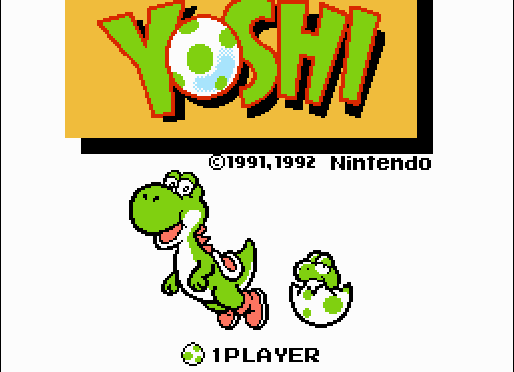 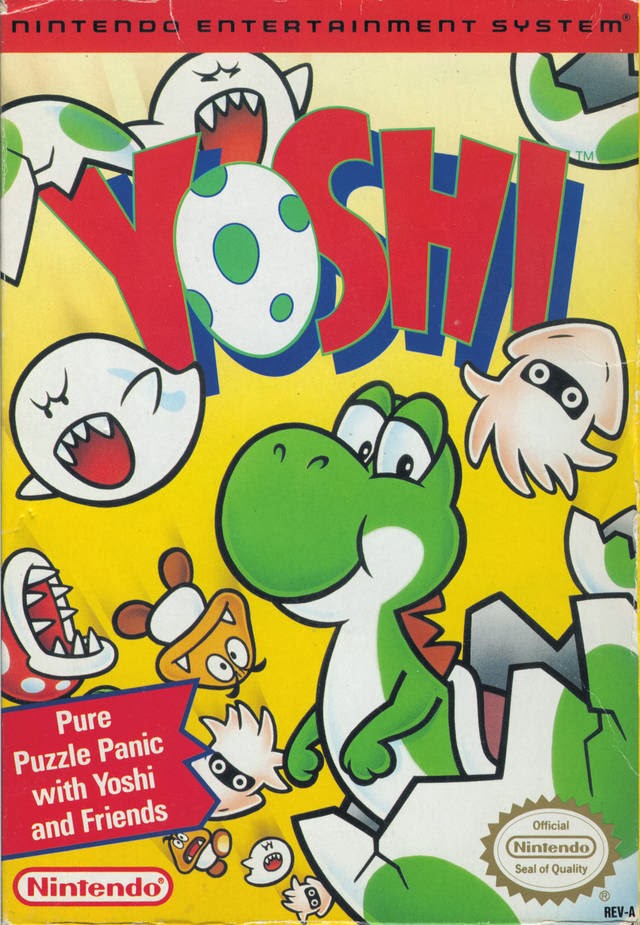 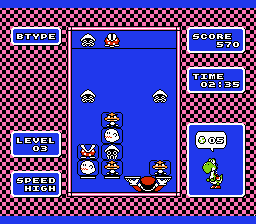 Today, Yoshi’s just another part of Nintendo’s legion of characters. Any time Mario throws a party, has a brawl, hosts kart races, or plays golf/tennis, Yoshi will be there. In 1992, however, Yoshi was still the newest, hottest Nintendo character out the game. Imagine gamers’ surprise, then, when Yoshi achieved a “starring” role in his own puzzle game, less than a year after his heralded debut in Super Mario World. To put things in perspective, Luigi – Mario’s own flesh and blood – didn’t get a game of his own until 2001 with Luigi’s Mansion (Mario is Missing, dear God, does not count).
Given the quality of Yoshi though, I’d say Luigi got the better deal. The game isn’t much more than a Tetris clone featuring Yoshi eggs and Bowser’s lackies. Once you start, notice that the playing field has four columns. Boos, Goombas, Piranha Plants, and Bloopers will emerge from these columns, though they only fall two at a time. Once they land on one of four tiles at the bottom of the screen, they turn into blocks. When two of the same enemy blocks touch each other, the blocks disappear. You control Mario below the tiles, and your job is to position the blocks under the columns with the appropriate falling enemies, so that the blocks will disappear faster. Broken pieces of Yoshi eggs will also occasionally fall from the columns. The top half of the eggshell will disappear once it touches anything, but the bottom half will land like any other enemy block. Once the bottom half has landed, fill it up with random enemy blocks. Then, when a top half emerges, place the top half on the top of the stack with the bottom eggshell. It will swallow up the enemy blocks, connect the eggshell, and pop out a Yoshi. It’s cute the first couple times it happens (the more blocks you have under the egg, the bigger your Yoshi will be), and it also nabs you some extra points. After birthing a handful of Yoshis on the backs of baddies, you’ll ask yourself, is this it?
Indeed, creating your army of Yoshis is the only strategic element in the otherwise shallow Yoshi. Any gamer who’s halfway decent at puzzle games could keep the enemy blocks from piling too high. Only on the later levels with faster speeds does it get difficult to keep switching the tiles around, and by then, you’ve either moved back to Tetris or Super Mario World, depending on the nature of your craving. As for poor Yoshi, he would have to suffer through one more puzzle game before acquiring the masterpiece that is Yoshi’s Island. But as the saying goes, you can’t make an omelet without breaking some eggs.
C
The following two tabs change content below.