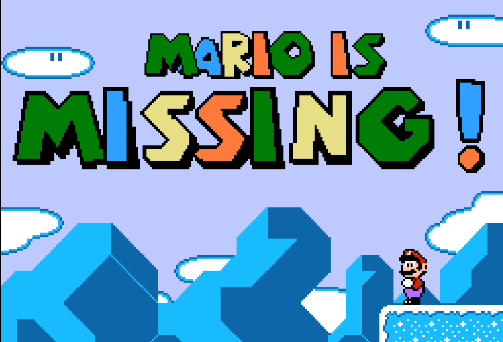 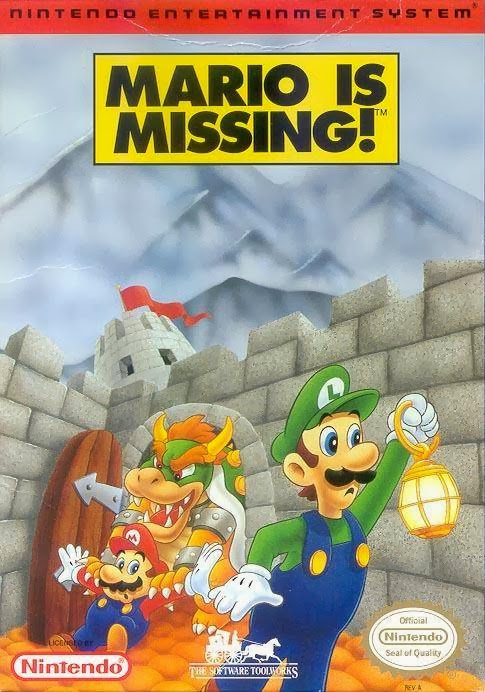 This cover makes Luigi look like an absolute idiot. HE’S RIGHT BEHIND YOU! 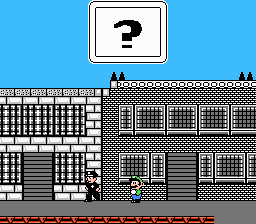 Excuse me, officer? I’d like to report a missing person – officer? OFFICER?!

Mario is missing, alright, along with the typical ingenuity, creativity, and good taste that define an average Mario game. Software Toolworks and Radical Entertainment are the parties predominantly responsible for Mario is Missing, but it’s certainly alright to blame Nintendo. For whatever reason, back in the early-to-mid 90s, Nintendo licensed their most beloved character out to third-party companies eager to use Mario’s visage to sell their crappy “edutainment.” Most children weren’t fooled, but parents were, which is why sales of Mario is Missing were strong enough to justify Mario’s Time Machine, and a triumvirate of crappy teaching games, all titled Mario’s Early Years! (exclamation point added by Software Toolworks in a poor attempt to excite preschoolers).
Admittedly, unlike the other aforementioned games, Mario is Missing has a brilliant hook: Mario is kidnapped and Luigi must rescue him. Not only does it thrust Luigi into the spotlight for the first time ever, it sounds like a promising adventure. Instead of capitalizing on Mario’s absence, the game forces Luigi to travel around the world and rescue artifacts stolen by Koopa Troopas. I’m still not exactly sure how returning the world’s artifacts to their respective locations allows Luigi to find Mario, but Software Toolworks doesn’t seem concerned with a clear story. Getting the artifacts back requires nothing more than approaching Koopa Troopas and stepping on them (the buggers don’t even hurt you when you touch them), then collecting the bag they leave behind. Once Luigi’s collected the three artifacts in a given location, you find the information booths in the city. The women (?) behind the booths ask you historical questions (the only “educational” part of the game). Answer the questions, drop off the artifacts, and Luigi’s done with that city. In order to beat the game, you have to do this exact same task for fourteen cities around the world. At first it seems doable, but by the third or fourth city, your soul will grow weary and yearn for freedom.
But wait, there’s more to complain about! You can’t just walk up to people – who look like misshapen acid rain victims, by the way – and talk to them. You have to select the ? Mark panel, which shows up at the top of the screen, then while you’re standing next to them, press ‘Start.’ It’s clunky and needlessly complicated. Yoshi has a supporting role in this game, but for no apparent reason, every time you enter a new city, you’re separated from him. In order to get Yoshi back to Luigi, you have to enter a separate world map, guide Yoshi to the city Luigi’s in, and Luigi will be reunited with him. Luigi needs Yoshi to talk to the woman at the information counter. Otherwise, he’ll be too short to talk with her. Yes, that’s right: Luigi can approach the information counter as many times as he likes by himself, but without Yoshi acting as his booster chair, he won’t be able to speak to the woman and advance the game. In Mario is Missing, Yoshi’s only role is to act as a booster chair for Luigi. Stupid, stupid, stupid.
The only thing Mario is Missing taught me as a young boy was to avoid any Mario-themed games not made by Nintendo. Until today, I had never played the NES version, but had wrangled with the SNES version. Outside of better graphics and slightly less complicated controls, they’re almost the same games. A definite miss.
D-
The following two tabs change content below.