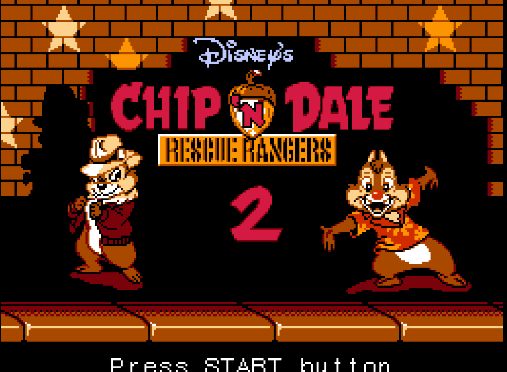 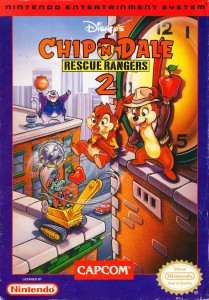 You don’t really throw apples in the game, but this is, once again, a fantastic cover.

If you’re wondering, yes, this level is very similar to a level from the first game.

From Super Street Fighter 63 1/3 Turbo Arcade Nuclear Edition to Mega Man Star Force Neo Joker Decathalon, it’s no secret that Capcom likes making sequels to their most successful properties. It’s also no secret that Disney worships money. As I said in my previous article, the two companies were made for each other and they should have never split off. This in and of itself should explain the existence of Chip and Dale Rescue Rangers Part Deux, but I’d like to delve deeper. I’m going to assume that the original Rescue Rangers game was one of the more financially successful Capcom/Disney ventures, along with the Ducktales game, as they were the only two Disney/Capcom games to receive sequels on the NES. I’m also going to assume that, because this game emerged around the end of the NES’ lifespan, little effort went into crafting it. Whereas the first game exuded whimsy and was a lighthearted take on some of Capcom’s other franchises, this second game feels like a forced obligation, a “why bother” affair that lacks creativity and heart.

Since this was a Capcom sequel, I knew to expect similar gameplay, reused sprites, and perhaps some decent animation. I was correct in my assumptions, but I never expected the game to be so easy and bland. I beat the game in about forty-five minutes and I even died a few times; usually as a result of moving up in a level and absentmindedly plunging to my death. 1-Ups and extra hearts are more plentiful than they were in the first game, and enemies come very seldomly. The crates are still there as your weaponry, of course, but the few enemies that do exist can usually be avoided. Essentially, the whole game feels very open and empty. Many of the backgrounds and levels feel like rejected Mega Man levels, or at worst, redone levels from the first game. The entire first level, for example, is a redux of the kitchen level from the original Rescue Rangers.

Perhaps lazy programming shortcuts could be forgiven if Capcom had added some fun to the game. Every level, with the exception of the Western World which has you navigating a mine cart, is the same basic, banal gameplay: run around, collect Rescue Rangers insignia to boost your health, avoid or kill enemies, beat a boss and you’re done. Yes, these are the same tasks you accomplished in the first game, but they’re much less inspired. Gone is any real challenge or depth, even compared to the simplicity of the first game. What sealed this game’s fate as an exercise in mediocrity for me, however, was the ending. The main villain of this game is Fat Cat and my expectation was that I would defeat him at the end of the game. After fighting and beating a Fat Cat robot, I escaped from the amusement park where I fought him (it explodes after you beat the robot, naturally). In a cutscene, the Rescue Rangers hold a powwow and wonder whether the real Fat Cat died in the explosion or if he escaped. Instead of looking for him, they conclude that he’ll probably show up again at some point. They all have a good chuckle (at the player’s expense) and a “The End” screen appears. That’s it! Hope you liked the game!

While I will forever uphold the first Rescue Rangers as a wonderful example of a good licensed game, I both rue and lament the very existence of the second. It’s a cheap, tacky exercise in mediocrity that, while not unexpected from Capcom the Recycling King, tarnishes their otherwise reputable Disney partnership. I will say, it is better than Adventures of the Magic Kingdom, but that is slight praise indeed.