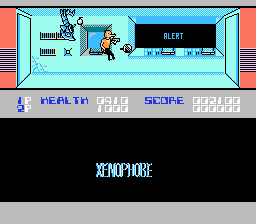 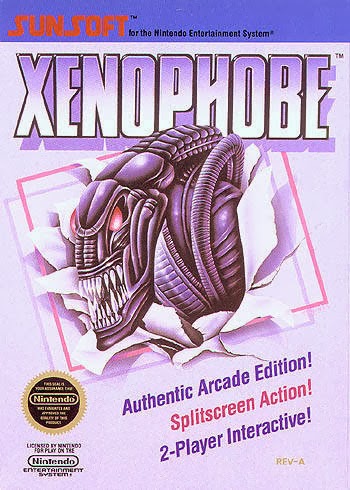 Dr. Kwack is a disgruntled duck doctor. Mr. Fogg is a misshapen potato man. Dr. Zordirz is a human of moderate proportions, but he wears an eyepatch and looks consistently grouchy/ drunk. These are the three protagonists of Xenophobe, and their mission is to rid their ship of creatures who don’t look much worse than they do. You move from room to room on the ship shooting aliens that regenerate, until the game decides that it’s time to start the next level. That’s it. There’s no implemented time limit, no amount of enemies you need to shoot before moving on. Even if you chose not to shoot anything, the level would eventually end of its own accord. You could theoretically beat the game without killing a single creature or obtaining any points. Can’t make this stuff up!
Let’s say you want to kill some aliens. Let’s say that you, like Kwack, Fogg, and Zordirz, have xenophobic tendencies which long to be released. If the latter is the case, I’m sorry, there’s not a great deal of action here. You start off with a puny one-shot plasma gun. It takes several hits to kill anything, and while you’re shooting, you’ll get hit several times by Snotterpillers (actual name). According to the manual, weapon upgrades do appear, but only when they feel like it. A Laser Pistol could emerge out of your first kill’s acidic carcass or you might never see one the entire game. Bombs will emerge more frequently than additional weaponry, but they’re a pain to throw. You’re better off taking the pacifist approach. Or, you know, turning off the game and getting some help.
D
The following two tabs change content below.