My love affair with the WWF (or the WWE, as it’s unfortunately referred to now) lasted two glorious years. From 1999-2001, my buddy Alex and I indulged in Sunday Pay-Per-View matches at his house, courteously paid for by his parents. WWF was knee deep in the “Attitude Era,” and the rise of some of the most memorable wrestlers to date: Stone Cold, The Rock, Triple H, among several others. These men and women were cartoonish, larger than life, yet they were also superb soap opera actors. I believed every bit of their apparent rage and hatred towards other wrestlers, their egotism and hubris regarding themselves. And the violence! For a supposedly “fake” sport, wrestling seemed brutal. The regular matches had some obvious fake moments (it doesn’t matter how hard you stomp the ring with your foot, gentlemen, you’re not punching your opponent), but the special matches – Tables, Ladders, and Chairs and Steel Cage in particular – felt all too real. As much as I enjoyed watching the matches with Alex, I saw no reason to tune into “Raw” or “Smackdown” of my own accord. The joy I experienced from watching wrestling was largely in the gathering itself: two friends, jacked up on soda, pizza, and the testosterone oozing from the television. For whatever reason, the tawdry thrills that wrestling generously provided bonded us as brothers.
The point of my anecdote was to express my limited understanding of any era of WWF/E outside that brief time. Sure, I know of some classic wrestlers – Hulk Hogan, Andre the Giant, “Macho Man” Randy Savage, Undertaker – but I wasn’t interested in wrestling itself as a small child. As such, I never rented any of the WWF games when they were still new and fresh, so I went into my time with them, free of any nostalgia. Perhaps this will explain their grades, or perhaps it will just reinforce that I’m a know-nothing jabroni from Arizona who needs to shut his mouth and know his role. Decide in the comments!
WWF WRESTLEMANIA 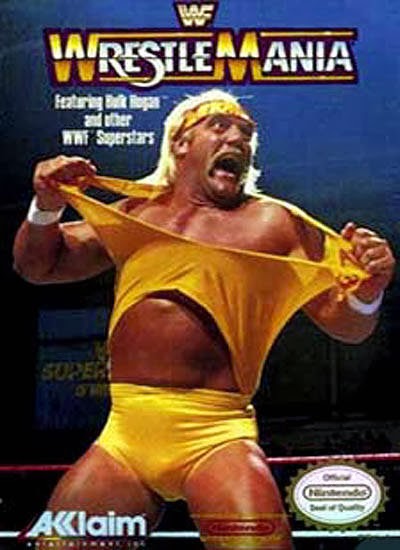 The Hulk really knew how to rip a shirt, didn’t he?

And do the foxtrot, apparently.

WWF Wrestlemania was only the second WWF title ever released, and the first to give you the ability to control your wrestlers (MicroLeague Wrestling, the first WWF game, was turn-based – for realsies). In other words, if you were a wrestling fan in ’89 and you liked Wrestlemania, I forgive you; you had nothing else. Twenty-five years later, clunky controls, unbalanced characters, and limited options make this game a sweat receptacle for the ages. Play options include Standard and Tournament. Standard is a one-round match that takes you back to the title screen once the match is over. Tournament is from one to six players (exchanging controllers) that has you fighting every wrestler in the game. You only have six characters to choose from – Hulk Hogan, Andre the Giant, Bam Bam Bigelow, Randy Savage, Million Dollar Man, and the Honky Tonk Man – and if you want to dominate, you’re pickin’ Hogan. The Hulkster can give and take hits like no other. Andre and Savage are alright, but the rest are trash. Whoever you choose, it’s a pain to pull off any moves other than simple one-button attacks. Button combinations used for special attacks or pinning opponents work only when they decide. Hit detection is garbage. Your pain tolerance may vary for how much you can take of Wrestlemania, but from this outsider’s viewpoint, there’s no nostalgia lost here.
D
WWF WRESTLEMANIA CHALLENGE 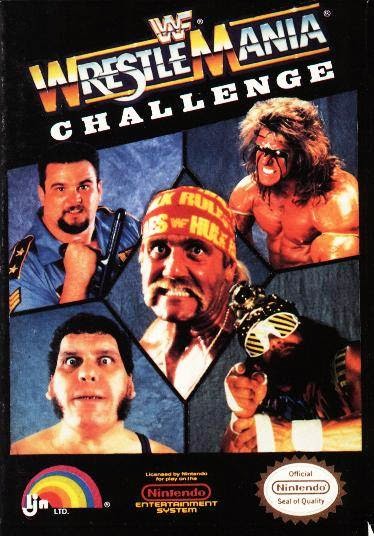 Macho Man’s just the best, isn’t he? I take him seriously because he doesn’t take himself seriously. 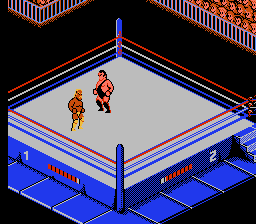 One year later, Wrestlemania Challenge emerged from the sidelines, with the intent of righting the wrongs of its predecessor. More characters (Ravishing Rick Rude! Ultimate Warrior!), fluid controls with useable move sets, and a bevy of play options make this entry worthy of the belt. Tag-Team matches and three-on-three Survivor series are most welcome additions, particularly when you’re droppin’ ‘bows with a friend. The characters remain unbalanced – Andre the Giant and Hulk are, now and forever, cheap – and it’s easy to spam body slamming until you pin your opponent. Regardless, there’s spirit and life on display in Wrestlemania Challenge. Despite its age, it’s an excellent 8-bit interpretation of the WWF.
B
WWF WRESTLEMANIA STEEL CAGE CHALLENGE 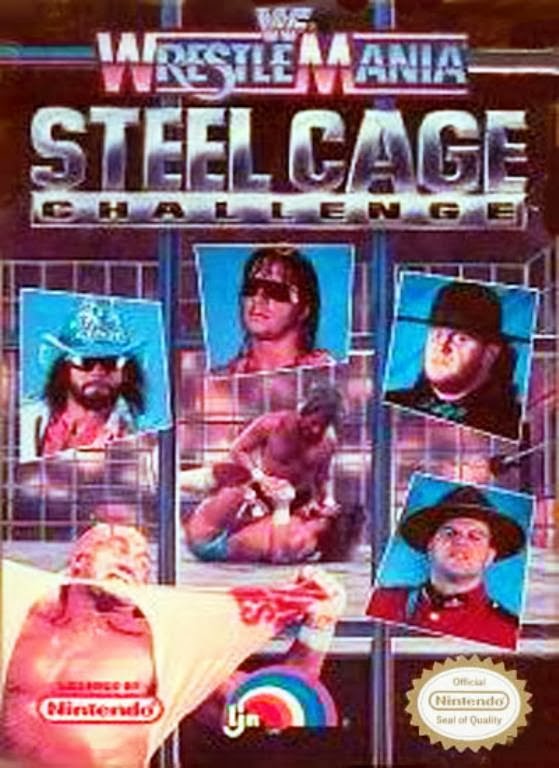 C’mon Mountie, you were never intimidating. 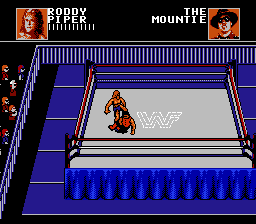 A square kick in the groin oughta settle his hash.

Sculptured Software, the makers behind forgettable dreck like Eliminator Boat Duel and Robin Hood: Prince of Thieves inherited Rare’s development mantle. The results are on par with Steve Austin’s acting career: not as bad as Hogan’s, but worse than the Rock’s. There are ten wrestlers this go-round, including newcomers Undertaker and Bret Hart. The addition of Steel Cage matches are appreciated, but not “we needed a whole new wrestling game just for these” appreciated. The music sounds like it’s creaking out of an old Victrola, the wrestlers look and move like stilted clay figurines, and like Wrestlemania Challenge, it’s easy to spam moves to win matches. None of the wrestlers have their signature finishing moves (though they do have their own musical themes, tra la la), and their movesets are all basically the same. Still, Steel Cage‘s solid controls and generous play options for one and two player alike, lessen the game’s negative aspects.
C+
WWF KING OF THE RING 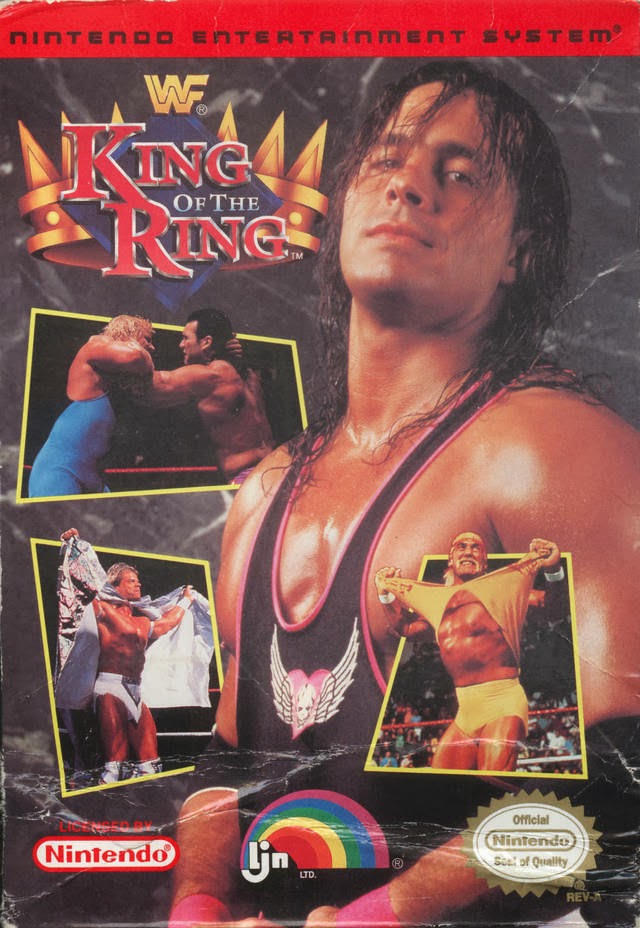 “Why yes, ladies, the Hitman is available.”

When did Shawn Michaels take over for the Cryptkeeper? Sweet merciful everything…

By late 1993, the NES was weary. “Send me to sleep/Send me to sleep/I’m tired and I/I want to go to bed” the Smiths once sang. Indeed, if the system had ears and self-awareness, these words would have resonated with it. Unfortunately, before the NES was laid to rest in 1994, it endured one final wrestling game, King of the Ring. Besides the additions of Speed, Stamina, and Strength bars for each wrestler (a most helpful feature that should have been in previous games) and the “King of the Ring” tournament, there is no feature or mechanic that Eastridge Technology improves upon from the previous three titles. If anything, the difficulty is more broken than it’s ever been. I was able to obtain the “King of the Ring” title for Mr. Perfect by using Body Slams and Stomps, nothing else. King of the Ring does control well (though, once again, the signature moves have been taken out), but the AM radio sound quality and chunky oversized sprites make for a horrific sounding/looking game, particularly in the late NES era. Wrestlemania is slightly worse, but King of the Ring is still a poor way for the wrestling saga to end on our exhausted 8-bit friend.
D+
The following two tabs change content below.