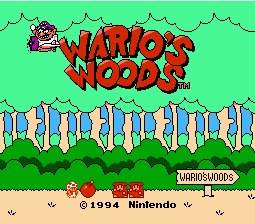 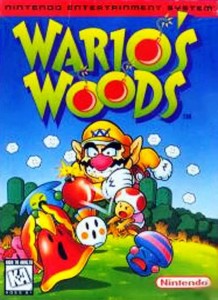 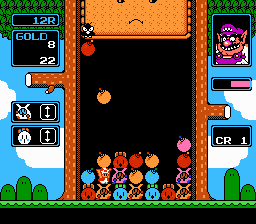 Wario’s Woods would probably be a minor footnote in Nintendo’s history, if it didn’t bear the distinction of being the last officially licensed title for the NES. December 10th1994 was the date of the game’s release (if GameFAQs is to be believed), almost three years and four months after the release of the NES’ successor, the Super NES. For the last decade or so, Nintendo has seemed eager to dispose of their systems around the five year mark, so the fact that the company supported the NES for nine years speaks volumes. The system was a triumph, effectively resurrecting the once-dead gaming industry in America, and shutting the mouths of naysayers who told them it was foolhardy to release the system there. Around thirty-five million lifetime units were sold in North America alone (worldwide, the number is closer to 60 million). Only the Wii, with 40+ million units sold in NA, has been a more successful home console for Nintendo. It’s too soon to tell if the Wii will be remembered as fondly as the NES, but as of 2014, the NES’ legacy is secure as the system that 1) shaped at least one generation of young go-getters, and 2) changed the home entertainment landscape in America forever. As for Wario’s Woods– a quirky puzzler starring Toad of all characters – it’s probably not the swansong NES fans were hoping for, but it stands as one of Nintendo’s best puzzle games. A solid end to a celebrated system.
Like Tetris or Dr. Mario, Wario’s Woods is a “falling block” puzzle game, where you eliminate all of the creatures on the playing field using bombs of similar color. Both creatures and bombs disappear when three of the same-color items are aligned. The rounds start out simple to get you acquainted with the concept, but by round 10 (out of 99), the enemies are stacked in multi-colored rows and the bombs fall hard and strong. Initially, the benevolent Birdo is the one throwing bombs of appropriate colors, but let the timer run out, and Wario will appear to pollute the woods. His presence causes the ceiling to be pushed down, and he will also throw out additional enemies. Wario and Birdo each have time limits for their presence, and they’ll switch back and forth until you’ve beaten the level or been crushed. The quicker you beat the level, the more coins will drop from the sky upon completion, enabling you to get extra lives. Along with the main game, there’s a Time Attack mode, a Two-player mode, and a Lesson Mode. It’s worthwhile to take advantage of the latter. Don’t expect to learn the game quickly. Take your time and learn the many moves of the Princess Peach’s favorite retainer.
Toad is a workhorse, arranging and re-arranging bombs and creatures with appropriate Mushroom Kingdom gusto. His tenacity is appreciated, but his controls aren’t as intuitive as one expects. Toad can run up stacks of enemies and bombs, which is welcome, but he can only pick up items that are adjacent to him. Perhaps Super Mario Bros. 2 runs too deeply in my veins, but to me, it would have made more sense for Toad to pick up items directly underneath him. Would the game have been too easy this way? Also, if you need just one bomb or enemy in a stack (as opposed to the entire stack, which you lift by pressing ‘A’), you have to run up the stack, align yourself with the item in question, and press ‘B’ to take it out. This is not the most time-efficient method, and as in all puzzle games, time is of the essence here. I did eventually make peace with the controls enough to enjoy Wario’s Woods, but I couldn’t imagine pressing through to the final stage, or God forbid, playing the game on a harder difficulty.
Once you get accustomed to the control scheme, Wario’s Woods is a fiendishly addictive puzzler that satisfies on a brainier scale, than say, Yoshi or Dr. Mario (the latter in particular is an overrated, repackaged-to-hell series that I wish would disappear). Its cult status all but ensures that Nintendo will never make an update or sequel, and perhaps that’s for the best. Additional entries would likely fail to improve upon the game in any significant way. And has anyone really beaten the game on “B” Mode? Besides, there’s always the SNES version. It’s got brighter graphics, goofy sound effects, and unless I’m mistaken, smoother controls. Playing Wario’s Woods on the SNES doesn’t feel as meaningful, though. It’s just another puzzle game, like Yoshi’s Cookie, Tetris Attack, or Kirby’s Avalanche. No doubt I’m being overly sentimental, but Wario’s Woods was the last gasp of air from the NES, a final mark upon the gaming world before it was laid to rest. Not only is it a good puzzle game, it’s a great piece of history.
B+
The following two tabs change content below.