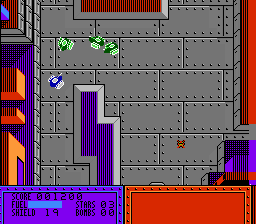 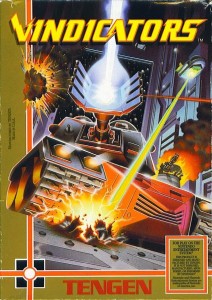 This cover is bonkers compared to the actual game.

Vindicators is the story of a space tank’s constant fight for survival. Literally, all you do in this game is shoot other tanks and collect items to prolong your tank’s existence. If you run out of fuel, you slow to a crawl and die. If you run out of shields, your fuel drains faster, then you slow to a crawl and die. There are items that give your equipment a small boost in each level, but they aren’t dispersed evenly. In other words, one stage might give you a ton of shield upgrades, while another will give you a bunch of fuel. You can upgrade your speed, weapons, shield, and refuel your tank after a level ends, with stars that you collect throughout the level. Stars are limited, though, so you’ll have to pick and choose what you want to upgrade, usually at the expense of something else.
Despite the constant anxiety and tension of keeping your tank alive (Lord help you if you’re on the medium or harder settings), Vindicators is quite addictive. The stages are short, so just when you’re beginning to get frustrated, they’re over, and you can start fresh from the next one. Two-player co-op is a beauty too, particularly when you have to fight the bosses; for whatever reason, though, the game doesn’t increase the amount of items it gives you in two-player, so you’ll have to share. As Vindicators progresses, you’ll be rooting for your little space tank. The odds are against him, but his tenacity should see him through.
B-
The following two tabs change content below.