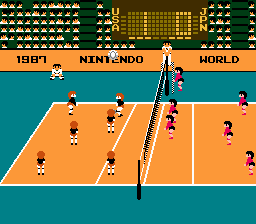 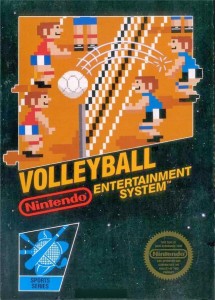 Wipe those smiles off your faces! Nobody’s enjoying themselves here! 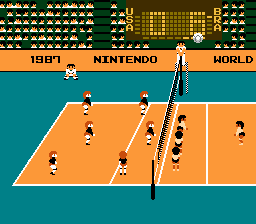 Volleyball makes you feel like you’ve never played a game before. After team U.S.A. – my pride and joy – lost to the Republic of Tunisia time and time again, I looked at my Nintendo controller as if it were a foreign object. Did I always suck this bad? Or are Volleyball‘s controls so flawed, its AI so powerful, that it leaves us mortals of gaming reeling?
Unlike the more prevalent beach volleyball games, Volleyball gives you a team of six players to control, not just one or two. Of course, navigating between six players with a two-button isn’t logical and Nintendo attempts to account for this with the training mode. In training, you begin a game like normal. When the ball is hit towards your side by the opposing team, your players’ shirts will turn red if they’re able to hit the ball. If the player’s shirt stays its normal team color, the ball isn’t coming in their direction, and thus, they aren’t able to be used. Often, two or three players’ shirts will turn red at the same time, enabling you to choose which one to use. This, in theory, will help you get used to the placement of your teammates in relation to the ball. When you exit out of the training mode and into a game proper, this handy feature disappears, replaced by a shoddy cursor that highlights the ball’s position above the court. When the cursor appears, you have little time to react with a hit before the ball lands, making the feature relatively worthless. If training gently held your hands, the actual game throws you into the woods without food or water.
I get that the red shirt thing was a training device. Without it, though, it’s difficult to tell which player(s) should hit the ball. Even when I sorta, kinda got the hang of which player should lob, spiking the ball – the only way to score a point on the other team – was impossible. Protecting against spikes was equally hard. Tunisia, my arch-nemesis, drilled holes in my side of the court on several consecutive occasions. Perhaps Tunisia is just really advanced, I thought. There’s probably not a lot to do in Tunisia, so they just play thousands of hours of volleyball. I played Brazil, hoping for a more reasonable challenge. They too drilled holes, like a hungry oil company looking for its next big score. And so, Volleyball left me defeated. I know it’s a poorly developed game, worthy of all hatred and scorn, but I still felt like I should have done better.
D-
The following two tabs change content below.