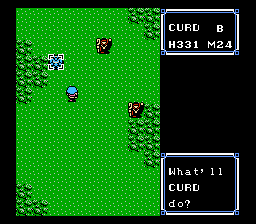 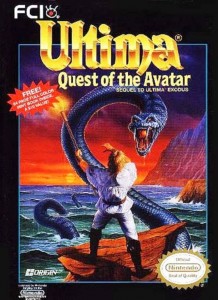 The poor souls who bought this game used, before FAQs were prevalent…

That’s always the question, and never the answer.

How groundbreaking Quest of the Avatar must have seemed in 1985. To wit: instead of revisiting the already tired “Hero Conquers Evil” plots of Ultima I-III, the goal of the game was to become the embodiment of Pure Good for the Land of Britannia. This means practicing eight virtues – Honesty, Compassion, Justice, Sacrifice, Valor, Spirituality, Humility, and Honor – as you traverse through Britannia, visiting shrines, exploring dungeons, and ridding the land of whatever evil remains. In the PC version, practicing the virtues was mostly accomplished in dialogues with townsfolk. Much like in contemporary RPGs, basic dialogue trees allow you the chance to cultivate goodness or neglect it entirely. In the NES version, the dialogue options aren’t as fully formed, due to space limitations – but they do still exist. When you first enter into Buccaneer’s Den, for example, you’re asked if you’re a pirate. Well, there’s no “pirate” character class found within the game, so you will never be a pirate. You could lie and say yes, thrusting your honesty levels downward, but potentially getting you in with the locals. Or say no, raise your honesty levels, and stay true to yourself (you’ll be surprised what the response is when you answer “no” to this particular question anyway).
Though Quest of the Avatar revolves around becoming the Avatar of Britannia, don’t think that there aren’t battles to be had. Evil still lurks within the fields and forests and mountains – trolls, wizards, pythons, skeletons, and more baddies traverse the entire world. The combat system is a refined version of the one found in Exodus. When combat begins, both your party and the enemies’ party are typically found at opposite ends of the screen. You’re then allowed to attack, move, and cast spells to your discretion. The combat is smoother, thanks to most classes’ ability to have a melee weapon and a long-range weapon equipped at the same time (the Bard was my class in this playthrough, and his long-range skills were first-rate). Battling does, however, grow tedious in later parts of the game, particularly when you’re grinding for money and just want to be on with your journey. For a game dedicated to perfecting goodness within a person, you sure do fight an awful lot. Granted, the enemies start every battle, but surely there are better ways for an up-and-coming Avatar of Goodness to resolve disputes than constant fisticuffs?
I can appreciate the impact the Ultima series had on RPGs back in the 80s and 90s, but the games just aren’t for me. Even more so than the original Legend of Zelda, you can complete the game in almost any order you wish – as long as you have essential items with you when you go into certain dungeons or shrines. This concept, while appealing, is also overwhelming, particularly when random battles lurk around every turn. The battles aren’t as plentiful or jarring as those in Final Fantasy, but they’re prevalent enough to grow exhausting. Too many battles, too much freedom. I’ve grown so spoiled in my gaming.
And yet, gameplay aside, Quest of the Avatar‘s plot is astounding, among the first of its kind in gaming. Almost thirty years after its release, this plot made me stop and take notice because it feels so out of date. The option to be good, evil or somewhere in between is more realistic, sure, but I like it when a game declares that you are good, evil, or ambiguous, and you must behave thusly; if you don’t like it, play a Bioware title. Particularly goodness, though. Moral ambiguity is all the rage in every facet of American entertainment, and much like the zombie trend, it’s run its course. Could Ultima IV – with its goal of making the player a leading pillar of virtue in a peace-filled, but morally adrift land – be made today with the same plot? Whether such a game would be profitable or not is another matter, but personally, I’d enjoy a break from hopeless, depressing antiheroes.
The following two tabs change content below.