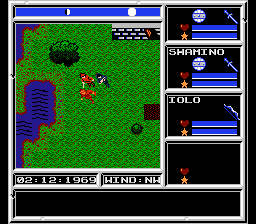 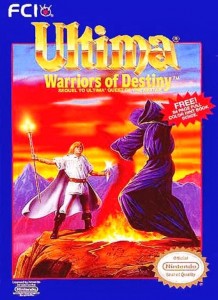 “Cometh at me, brother!”

The Ultima ports on the NES are defined by their varying quality. Exodus had its faults (some might say ‘quirks’), but it was playable. Quest of the Avatar lacked some of the depth of the PC version, but it was a good game, if you could get used to wandering around for hours on end. Warriors of Destiny doesn’t even shoot for quality. It’s a broken, useless port that does great disservice to the storied Ultima series.
The story, as usual, is intriguing: Lord British has gone missing on an expedition to the Underworld, and has been replaced by Lord Blackthorn. Blackthorn is being controlled and manipulated by the Shadowlords, three evil beings who cause him to twist the Virtues established by the Avatar in the previous game. You, as the Avatar, must find Lord British and restore him to his rightful place on the throne. I’m already hooked at this point, but once the cutscenes end, Warriors of Destiny begins in earnest, and my hopes for a thoughtful, well-developed RPG are dashed against the Avatar’s cabin.
Initial thoughts: what happened with the controls? Why don’t the characters respond right away when I press any direction on the D-pad? It’s like they’re constantly trudging through a sludge-covered, honey-dripped molasses. Their movements are so choppy and slow, it’s distracting. Already, the game’s lost me. I don’t have the patience to move at five frames-per-second. But alright, if I knew where I was going, maybe I’d summon some patience to at least get somewhere and do something. No, even walking along a path, hoping to find a town or someone to talk to takes ages, and my patience has already left my side, like the cowardly bastard that he is. I start pressing buttons. What happened to the menu? In the previous games, the menus had a handful of options: Talk, Grab, Cast, Eat, Sway, Love, etc. Here, there appear to be only two options (represented by symbols instead of text), and I’m not sure what they are or what they do, thanks to my lack of manual or decent FAQ. When I press on them, they don’t do anything to my characters or to the landscape around me. I’m assuming one is ‘attack’ and the other is… whatever it wants to be. I have no idea what I’m doing nor do I care to press forward and save Britannia from Blackthorn and his tyrannical shadows.
Have any valiant warriors from Britannia made it back alive from Warriors of Destiny? Why would anyone want to handle this trash, when the original Apple II game is reported to be excellent? This has to be one of the worst games I’ve ever played on the NES (one of the most poorly developed, at any rate). No man’s virtue should be sacrificed for such folly.
F
The following two tabs change content below.