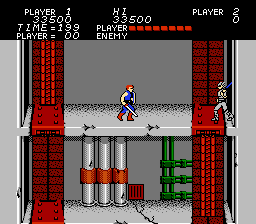 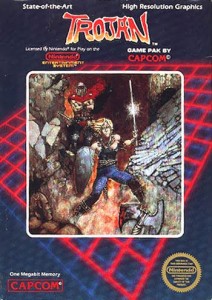 Co-starring Bon Jovi and The Shredder!

Compared to Capcom’s better remembered arcade ports for the NES, Trojan remains in semi-obscurity for its inability to distinguish itself. The game feels like a cautious transition between the overbearing non-stop action of Ghouls ‘N Ghosts and the exploration elements of Strider, as if Capcom was unsure of where to go next. This uncertainty doesn’t make Trojan a bad game, just an atypical nondescript brawler that ultimately led to more fully-realized Capcom games.
You control Trojan, a big redhaired dude with a sword and shield who battles other dudes (and dudettes) with swords in a post-apocalyptic setting. Unlike Arthur who, when hit, gets stripped down to his heart-filled boxers, or Strider, whose bad-ass wall jump was a minor revelation, Trojan has no traits to call his own; he’s just another personality-devoid warrior looking to save the world. Like Ghouls ‘N Ghosts, enemies will replicate themselves and never stop coming for you, but the difficulty isn’t as swear-inducing, thanks to Trojan’s sweeping sword attacks. He also has a shield to block projectiles, which is handy, but difficult to control. The shield is controlled with the ‘A’ button, which means his attack is ‘B’ which means… *sigh*… ‘Up’ is jump. Thank God jumping doesn’t feel too awkward, a testament to Capcom’s tight controls. Most of the levels are short: three-to-five screens of enemies each, followed by a boss. Before you know it, Trojan‘s over, and you’re left wondering why a Capcom-developed NES action game feels so inconsequential.
And yet, around the fourth level, something strange happens: Trojan must collect keys in order to open doors. The keys are not difficult to obtain, but going out of your way to find them is the one instance in Trojan where Capcom deviates from the traditional action brawler formula. Sound insubstantial? Perhaps. But I’d argue that Capcom knew exactly what they were doing with this level. Collecting the keys feels out of place and unnatural, and it’s also a welcome reprieve from the constant button-mashing. From level five to level seven, it’s sword-slicing action as usual, with no further digressions.
With this brief key-snatching section, I believe Capcom was testing the proverbial waters of the console format. Would players be content with entertaining, albeit mindless, brawling, as they were in the arcades? Or would they crave a deeper experience with their action in the home? Capcom must have felt the latter was the case. Bionic Commando, Strider, and of course, the Mega Man series are some of the most successful and influential action games on the NES, thanks to their willingness to experiment with the arcade action formula. Trojan may or may not have been the impetus for future successes, but, given the game’s release date (early 1987), it feels like a turning point for the company’s console game strategy. Trojan is not Capcom’s most creative hour, but if it helped bring us better games, then I’m thankful for its existence.
B-
The following two tabs change content below.