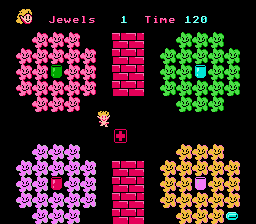 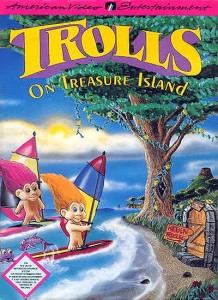 Perhaps the cave will hold some pants.

I always knew there were Trolls on Treasure Island, but until I learned of this game’s existence, I couldn’t prove it. Trolls On Treasure Island is an unlicensed puzzle game where you steer Troll dolls to collect jewels amidst floating mouths, chewing gum, and spike traps. The Troll dolls never stop moving horizontally. All you, the player, can do is lead them up or down. The jewels have different colors, and the color of the Troll’s hair dictates whether you can collect them or not. Since you’re required by Treasure Island law to collect every jewel from every level, the appropriate color cubes have been placed in each level for your convenience; run into them to change your hair color.
Each of the thirty-two levels has a gimmick: in level 6, for example, there’s only one blue jewel to collect, but there are four different piles of colored gum pieces that surround the color cubes. Your troll’s hair starts off yellow, so deplete the yellow gum pile first. In the middle of the yellow pile is a purple color cube. Dip your hair in the cube, then start depleting the purple gum pile. The purple gum pile has a red cube in its center, and the red gum pile has a blue cube in its center. Deplete all the gum piles until your hair is finally blue, then hit the lone blue jewel and run to the exit. Level 6 is tough, if only because the gum can hurt you if your hair color doesn’t match the gum’s color. But at least if you hurt yourself once, you can heal by touching the Medical cube. Later levels include slippery ice, water which is only crossable with a “sailboat” item, gray cubes that switch your hair to random colors, and often, no Medi-cubes to heal yourself. If you get hit twice, you’re dead, but there are (as far as I could tell) unlimited continues. Trolls might be trying to co-exist with the inhabitants of Treasure Island, but their acceptance doesn’t come easy.
If Trolls on Treasure Island looks familiar, that’s because your knowledge of obscure NES titles is first-rate. The game is actually a sequel to Dudes with Attitude. Both games contain the same gameplay – collect jewels, never stop moving, etc. – but in the latter, you control a creepy floating face and the levels are of a casual difficulty. Trolls on Treasure Island is the better of the two games, thanks to its endearing main character (Troll dolls are disturbing in real life, but their virtual counterparts are cute!), deep challenge, and refined level design. If only all bizarre unlicensed games were this amusing.
B
The following two tabs change content below.