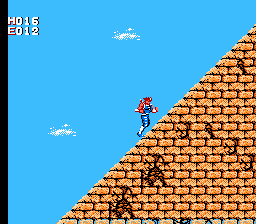 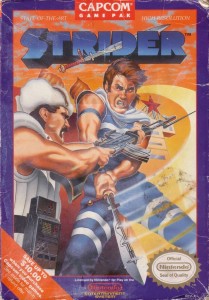 He also runs laps up the pyramids every day. “It’s good for my glutes!” he cries.

Strider should be great. Capcom developed it. It stars a sweet ninja with a boss sword. There’s rollicking music, enemies everywhere, world travel, power-ups, upgrades, friggin’ magic. But the controls – mornin’ glory, the controls! During the intro level, Strider seems to do alright. He can jump, move, and slash when appropriate. Once you get into the meat of the game, however, his move list falters. Sliding is awkward enough, but the Wall Jump (also known as the Triangle Jump) will stop your progress in the game if you fail to learn it quickly. Like with Samus in Super Metroid, Strider has to jump towards the wall, then hit the D-pad in the opposite direction and jump to perform it successfully. It’s a key move in the game, thus it should be simple to pull off. Certainly many have, as evidenced by the retro community’s relative fondness for Strider. I did the Triangle Jump one time, then never again. And yes, I “practiced,” as many gamers have said to do; much longer than needs be, in my opinion. I don’t expect NES controls to be perfect. Even certified classics like Castlevania have their issues with jumping. But for Hiryu’s sake, Capcom, tighten the controls. Up until the point in Egypt where I became stuck, Strider had been a fantastic blend of arcade action and console adventure, and a worthy companion to its arcade brother. If anyone has any solid tips for me, feel free to leave a comment because I want to love this game. For now, Strider is broken.
C-
The following two tabs change content below.