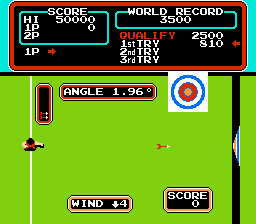 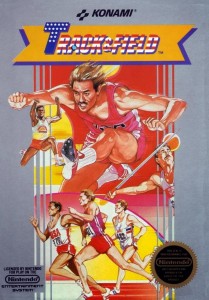 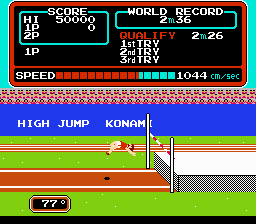 Methinks this will not end well.

If you’re feeling Olympic, look no further than Track & Field, the game that shows you just how out of shape you really are. Konami gives you eight athletic events repeated ad infinitum: the 100-Meter Dash, Long Jump, 110-Meter Hurdles, Javelin Throw, Skeet Shooting, Triple Jump, Archery, and the High Jump. You can select any event at the start of the game to get a feel for it, but should you qualify, you’ll have to keep playing through all the events in the menu order. They start off easy. 100-Meter Dash is a button mash, a real knee-knockin’ smash. Literally, all you do is hit ‘A’ with whichever finger you wish to fall off. The Long Jump, the 110-Meter Hurdles, and the Javelin Throw continue the mash-a-thon, while hitting ‘Up’ and ‘Right’ on the D-pad enable you to jump and throw respectively. These four events ably combine precise timing with blunt force. Triple Jump and the High Jump utilize similar controls, while asking the player to account for the angle of the jumps; tougher to master, but still enjoyable. Archery is an excellent change of pace. Hold back ‘Left’ on the D-pad – far, but not too far – then let go as the target sails past. Skeet Shooting is the only real stinker, due to its bizarre mechanics. As skeets are launched, two boxes “automatically” target them. All you, in theory, have to do is shoot them, but your timing has to be dead-on. Unlike the other events, Skeet feels more luck-based than skill based. As a whole, Track & Field is fun to play for five minutes or an hour, depending on how deep you want to go. It’s one of the purest mini-game collections on the NES.
B+
The following two tabs change content below.