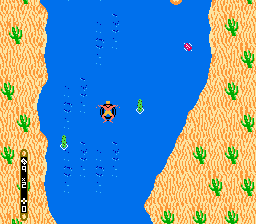 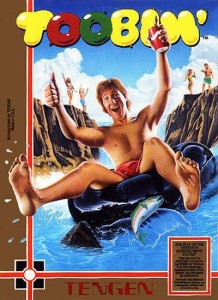 The concept of Toobin’ is one of the all-time best in video game history. Two bros named Biff and Jet embark on a tubing adventure around the world and beyond. They start off on the Colorado River, but before long, they’re rollin’ down the Nile, the Amazon, River Styx (yup, in the underworld), Jurassic River, and even up to Mars. With a cold sixer in their hands at all times? Bro! Cans are literally everywhere on these rivers, both for Biff and Jet’s consumption and as weapons to huck at angry river denizens. And there are a lot of them: hillbillies, banditos, dinosaurs and more all want to see the boys fail at their tubing expeditions. While it’d be nice to gently float down the river, brew in one hand and babe in the other, that’s not in the cards. Besides the shore dwellers, there’s also plant life, raging rapids, and warping whirlpools to watch out for. Given the flimsy nature of most inner tubes (even professionally made ones), one hit and you’re sunk. Thankfully, Biff and Jet are fully acquainted with the controls of their tube. Never do you feel like you’re gonna lose control of them and wipe out. Toobin’ is an arcade port, and while it doesn’t look the greatest (borderline Atari 2600-graphics, here), the laid-back, hilarious nature of the original game still shines through. KICK IT.
B
The following two tabs change content below.