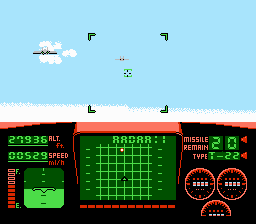 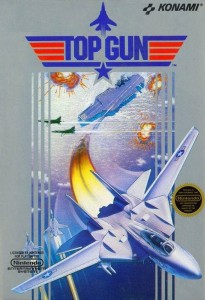 If you look real close into the cockpit, you still won’t see any of the movie’s lovable characters.

Mav, Goose, Iceman, Cougar and the boys are nowhere to be found in Konami’s name-only 8-bit interpretation of Top Gun. In place of these hunks of beef is an average flight simulator, more known for its difficult landing procedures than stellar gameplay. First the missions. There’s only four of them, with one of them being a “training” mission; or, as I like to call it, a “figure out the controls” mission. Controlling your plane in the air is simple compared to other 8-bit flight sims: Up steers you down, Down steers you up, ‘A’ shoots your birthday pellets, holding down ‘B’ fires missiles, ‘Start’ brings out the Re-fuel plane (there is no pause feature – unfortunate, as the game could really use one). There’s a map grid on your plane’s dashboard that’ll show you incoming bogeys and such. Planes are but one enemy: you’ll also have to deal with subs, battleships, aircraft carriers. Once you carry out the goal of the mission, the game will initiate the landing sequence. Your plane will begin to descend on its own, but as you approach the aircraft carrier, your dashboard will shout instructions at you: “Right, right!” “Speed up!” “Blast Kenny Loggins!” If you don’t follow the instructions to a fault, your plane will crash into the water and you’ll lose a life. You’re still able to proceed to the next stage, but with your three-life supply, you won’t make it past stage two or three if you can’t land your plane. The landing sequence is unforgiving, but it’s also the most interesting portion of an otherwise forgettable flight sim. Save your breath (away) for a better game. Top Gun‘s all business, no party.
C-
The following two tabs change content below.