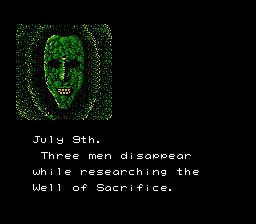 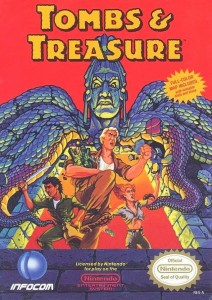 Don’t you hate it when that happens? 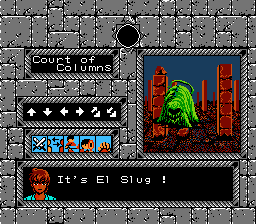 Tombs & Treasure (perhaps the ultimate winning combination) stars a tow-headed young lad and his green-haired girlfriend as they search for clues regarding the disappearance of the lad’s father. Fasten your brain belts: it’s an adventure game. Like Deja’ Vu or Shadowgate before it, no area is free of mystery, no item meaningless, no puzzle solution void of head-scratching. Unlike the aforementioned titles, Tombs tosses in mild RPG elements. Instead of progressing from screen to screen through a menu interface, you walk between different places via an overworld map. Don’t worry about random battles on the map. Battles only take place in certain locations at precise moments (usually when you first enter a new area or after you’ve solved a puzzle). There’s no strategy involved here. Simply select the ‘Fight’ option and hope you’re at a high enough level to kill the monster. If you win, you automatically level up (you also level up when you solve certain puzzles, though the game never tells you when). Solving puzzles is Tombs and Treasure‘s emphasis, and my lands, are they ever vague. Not at first, but later on when you’re trying to figure out why the Golden Globe in El Caracol isn’t making an item appear in the Court of Columns. Wait, I have to use the ‘Wait’ option until enough time passes so the sun hits the Golden Globe, which reflects light off a strange brick in the wall? Wait, those are two different puzzles altogether? Needless to say, an FAQ is essential to enjoying yourself.
B-
The following two tabs change content below.