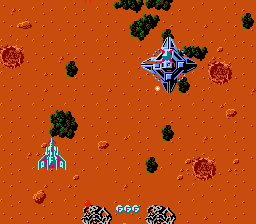 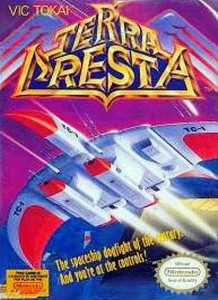 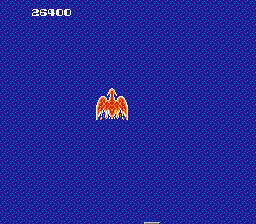 Terra Cresta will forever be known as “that one shooter that lets you turn into a dragon and be invincible and stuff. Yup. That was cool.” Turning into a dragon and running amok in any game is a win, particularly if said game is a brutal, claustrophobic shmup. Pity your poor un-upgraded ship, as it spews at legions of vibrating orbs with a double peashooter! Rejoice as it collects upgrades and turns his ship from a class Z dropout into a class AAA bullet tycoon! Mourn the loss of your upgrades once your ship is hit by a whizbang projectile that came out of nowhere and everywhere ’cause you can’t turn your back without running into a stupid orb or a stone dinosaur. Much like Gradius or any other mid-80s shmup that went for broke, losing your upgrades in the middle of an advanced level will see you killed faster than a mob snitch. And Terra Cresta pauses for no man. The stages bleed into each other. Bosses come and go. If you kill them, enjoy your points and the obligatory extra life. Otherwise, they’ll retreat, robbing you of time, bullets, and dignity. Yes, in Terra Cresta, for approximately thirty beautiful seconds (and only if you collect all five upgrades), your ship transforms into a flaming dragon. And you can go forth and wreak havoc upon the orb community, and it will refresh your opinion of the game. But without the dragon and the upgrades, Terra Cresta is a bite-your-fist difficult shmup that teeters on mediocrity. Your mileage will vary.
B-
The following two tabs change content below.