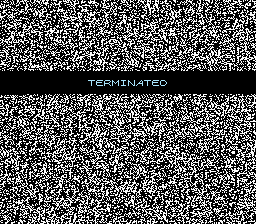 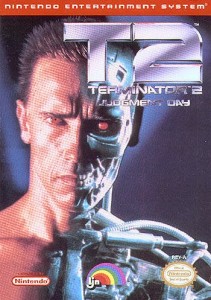 The judgment is in his eyes. 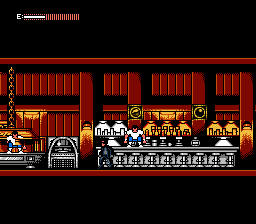 Arnold just wants a drink, not a hullabaloo.

“Terminator 2” is one of the greatest action films of all time, so its only natural that its 8-bit counterpart reek of melted exoskeleton. Besides the ever-obvious fact that game ports of movies are universally terrible, Terminator 2 strives to emulate the best set-pieces of the film, yet the levels come across as stale and hollow. Take the second stage where you’re driving Arnold through the flood channel. There are gates in front of you that you need to shoot, and the T-1000 is driving a semi-truck behind your rear. If you fail to open one gate via a well-placed bullet, one of your units is trashed. If the T-1000 hits the back of your cycle, you’re dead. Never mind that the Terminator is composed of hyperstrong metal from the future that puts our silly 20th century gate metal to shame. Never mind that he has a life bar the size of Texas. And never mind that the level would be enjoyable if it weren’t for the one hit kills. Stages 3 and 4 are trips through the mental hospital and Cyberdyne, respectively. In the mental hospital, you locate security cards to get you further through the hospital. But what about that fat shotgun the Terminator has at his side? The one that could blow through any security lock? In Cyberdyne, you collect bombs, deposit them, collect more, deposit more, then blow them up in an 80 second time limit. Ugh. I just want to be the Terminator and shoot people and protect John Connor and be awesome. No bomb gathering, no “better not hit a gate” mentality. If Terminator 2 just ripped off Contra, it’d be a worthy complement to the film instead of a humdinger of a suck.
F
The following two tabs change content below.