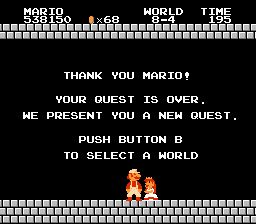 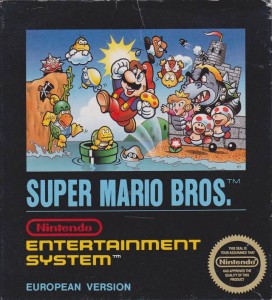 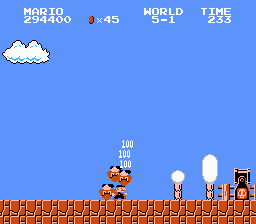 The Bullet Bill’s arrival marks the second half of SMB. Up until this point, the Flying Cheep-Cheeps were the only enemies not tethered to the ground, but they’re limited to select stages. The Bullet Bill emerges (mostly) from stationary ground cannons, meaning they can be placed almost at any point in most stages – and they are. Hardly a stage goes by after this where the Bullet Bill doesn’t make an appearance.
World 5-2 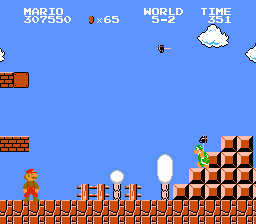 Nah.
5-2 ups the stakes. The Bullet Bill returns, as does a lone Hammer Brother. This is the first stage the Hammer Brothers don’t appear as a unit. When united together, they move vertically between three layers of brick. When separated, they could be anywhere: on a staircase, on the ground, stationary, moving forward and backward. Because of their haphazard placement, they’re much more dangerous alone than together. This is one of the first stages too where you will begin to search desparately for mushrooms and fire flowers – anything to give you an edge over your environment. There’s also a hidden water zone, which took me by surprise. Not sure if it’s the first in the game, but it’s the first I’ve discovered so far.
World 5-3 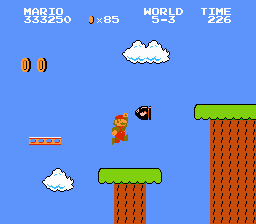 Mario’s gettin’ mighty sick of these Bullet Bills.
5-3 borrows its layout verbatim from 1-3, with two differences: the levitating pink platforms are shorter than before, giving Mario less room for error when he lands; and Bullet Bills are coming at you, shot from cannons that are out of sight. This makes a once peaceful, easy stage more of a nightmare, as you will have no idea what height the Bills will be shot (thankfully, they are always launched right to left instead of every direction). They seem to be shot near Mario, not directly at him, which is thoughtful on Nintendo’s part. Very little generosity from here on out, though.
World 5-4 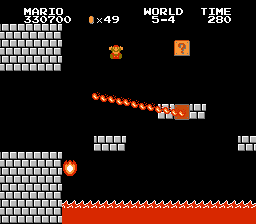 Not sure what happened here (props to Vgmuseum.com for this snap).
Much like 5-3 borrows from 1-3, 5-4 takes its cue from 1-4, albeit with added fire power. More rotating fireball pillars than you’ve ever seen up to this point, along with one that’s so long, it’s downright comical. With the pillars and the fireballs coming out of the lava and from Bowser’s direction, this castle forces you to move faster and more precisely than any castle before it. And there’s three more to come.
World 6-1 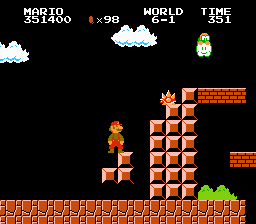 Lakitu’s just tryin’ to do his job.
6-1 sees a return to the night – and the jerkface Lakitu. Unlike 4-1 where Mario could run from beginning to end without much interference, 6-1 contains intermittent brick staircases, forcing Mario upwards towards the Lakitu and his bevy of Spinies. There’s some power-ups interspersed throughout the stage, but like 4-1, it’s best to just book it as quickly as you can.
World 6-2 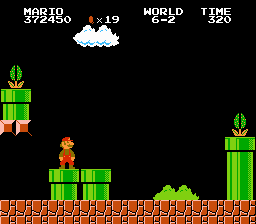 Mario sure does contemplate a lot in these snaps.
Home to a legion of Piranha Plants. At certain sections, it’s all pipe, no ground. If you have a Flower, you can take them out easy. If you’re small or rockin’ a standard Mushroom, you’ll have to be patient. Don’t miss the vine in the middle of the stage. It’ll lead you to extra coins, which lead to extra lives. You’ll need ’em for later.
World 6-3 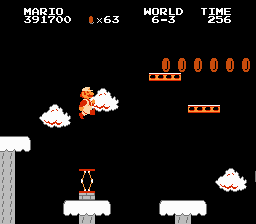 White chocolate was drizzled over the landscape. Only Mario survived.
This treetop stage is covered in a weird chalky white color, which I believe is supposed to be snow. Can anyone verify this? This stage frightened me as a child, and I can see why. What happened here? Did the Mushroom Kingdom have a bad storm? Or is Bowser robbing different sections of their essence? Either way, kudos again to SMB‘s ability to change up a setting, however slightly, and produce an entirely new feel – also Bullet Bills make an appearance halfway through the stage, ’cause why not.
World 6-4 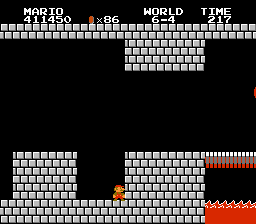 Mario decides to rest before the inevitable.
Castle 6 is typical and unremarkable (look! More rotating fireball pillars! Mario can barely squeeze by!) until you get to Bowser. If your play-through resembles mine in any way, chances are, you’re small Mario at this point, devoid of any power. No sweat, right? Just run under him to the next Toad. But oh wait, Bowser can throw hammers now. This new arsenal makes running under him trickier. I still did it, though. You can too.
World 7-1 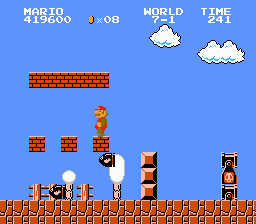 Not shown: two dead Hammer Brothers.
Bullet Bills, Koopas, and Hammer Brothers – dear Lord, help us. This is the first stage to not give a flying nun about the player. Within the first screen, you see the first double-stacked Bullet Bill cannon. The Bill cannons are all over the place. Mario can hardly run a couple inches without plowing face first into them. Hardest part of the stage: the Hammer Brothers blocking any progress Mario could make vertically, coupled with Bullet Bills impeding you horizontally. Worst tag-team ever.
World 7-2 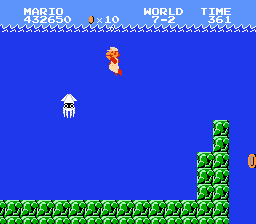 Blooper just wants a hug – an inky, rubbery, death-grip of a hug.
Feels like ages since Mario’s put his flippers on. This go-round in the sea (I wonder if the water is just clean-looking sewage – Mario does venture down a pipe to get there, after all), swarms of Bloopers and Cheep-Cheeps confound you at every turn. If you don’t have a Fire Flower for this portion, I’m not sure what to say. Your small size will help you some, but there’s so many damn enemies. Stay spry.
World 7-3 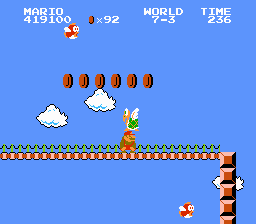 Count ’em, six coins (again, thanks be to Vgmuseum.com for the snap)
Another floating bridge stage a la 2-3. It would basically be the same “run from Flying Cheeps” affair, if it weren’t for the addition of some derpy Koopas on the platforms. Some of the Koopas crawl, but most will hover at a low angle, forcing you to jump (likely into a renegade Cheep) or gracefully duck underneath them. If you can duck, do it. It will probably save your life and you’ll feel like The Ultimate Mario Player.
World 7-4 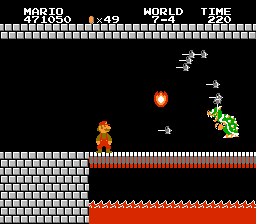 Friggin’ hammers.
The final castle before the final castle. This is another pick-your-own-route-but-not-really castle. 7-4 gives you a generous 400 seconds to figure out which of the three routes you need to take in the two sections, but it’s still wise to run through, if you can. Honestly, if you’re not comfortable running with Mario through dangerous situations by now, just turn off the game. World 8 will make you sob in your cereal. Oh, and Bowser’s got his hammers again, the bastard.
World 8-1 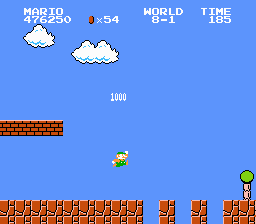 Mario just felt like run-ning.
300 seconds. Twice as long as your average level. 8-1 forces Mario to run over gaps like a magician, and make bounding leaps like Baryshnikov. Goombas, Beetles, and Koopas are running amok all the while. This level is disgusting – and it’s also my favorite level of the entire game. Once you memorize enemy placement and get Mario into a steady run, the stage is pure exhilaration.
World 8-2 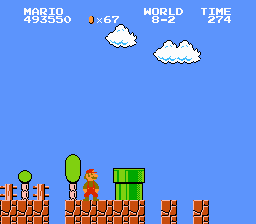 Craziest jump in the game.
The level begins with two awkwardly built brick staircases, two Paratroopas bumbling their way down, and a Lakitu huckin’ Spinies at you. 8-2 plays for keeps. The good news is, directly after that clusterfluff, there’s a 1-Up in a brick directly below a trampoline. Get it once and keep it, or die later in the level, then return to get it again. It’s SMB‘s last generous move before the final two stages. The rest of 8-2 is chock full of Bullet Bills and Paratroopas.
World 8-3 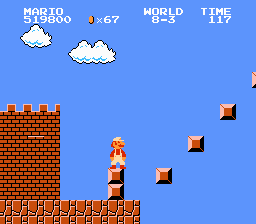 Stairway to Flagpole.
The Hammer Brothers rule this section, and they’ve apparently breeded like crazy. Once you knock out a pair, another pair shows up. I highly, highly recommend bringing a fire-flower with you into this level, or at least, acquiring one before the end of the stage (it is possible). Not so much for the Hammer Bro pairs, but for the loners – the ones that lost their brother. Towards the end of the stage, there’s three or four single Hammer Bros that stand on the ground and chuck hammers like crazy. Much like Bowser, you can run under ’em when they jump, but they move faster than Bowser so it’s more of a gamble.
World 8-4 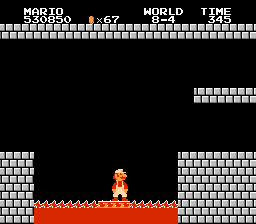 What sorcery is this!
Bowser’s true form and true castle awaits. 8-4 is unlike the other castles. It’s expansive, it’s vast, and there’s nary a rotating fireball pillar in sight (until later). Like 7-4, it forces you to pick the correct route to advance, but instead of picking one of three directions to move forward, you have to select the correct pipe. Usually, there’s no way to tell which pipe will lead you further into the castle. If you pick the wrong one, you’re back to the beginning of the castle. It’s trial-and-error, baby, and the time, she is a-dwindlin’.
I appreciate 8-4 for its craziness, like the platform placed underneath the lava, so you can hardly see it; flying Cheep-Cheeps inside the castle; and my favorite, rotating fireball pillars under the water. If this isn’t proof Bowser’s a warlock, I’m not sure what is. 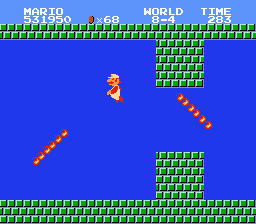 That just raises further questions.
I made sure to have a Fire Flower at the ready for the final encounter. Despite beating Super Mario Bros. numerous times, I had never beaten the true Bowser with a fireball. In the previous castles, any time you take a fake Bowser down by fire, the costume comes apart and the enemy (Goomba, Beetle, Koopa) is revealed before plunging into the lava. Turns out, if you destroy the real Bowser by fireball, he just looks like Bowser when he dies. Why I thought he would look different, I’m not sure. At any rate, THE END. You encounter Toadstool, who could probably use a shower and reconstructive surgery (I believe Bowser breathed fire on her face  regularly during her incarceration). She informs you there’s another quest, if you’re man enough. I think Mario’s mustache and untrimmed chest hair say it all.

Thank you, Mario, but your troll beast is in another castle.
The following two tabs change content below.