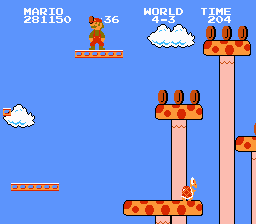 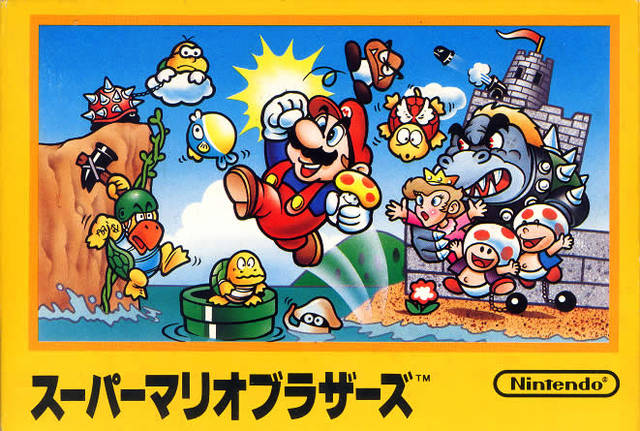 Bowser and Toadstool/Peach have come a long way. 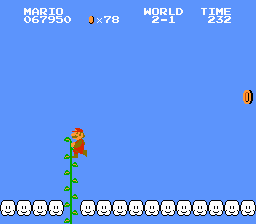 The lack of oxygen doesn’t hold Mario back from dancing on a vine.
With the second world, Nintendo tweaks an important ground rule established in World 1. Want a mushroom or fire flower? Check every block, not just the “?” blocks. Later levels will beat you into submission and force you to do this in order to survive. You may as well check every block anyway. Towards the middle of the level, the first heaven-ascending vine is punched out of a block. Climb up the vine, do a jig, jump on the cloud, collect your coins, descend. Don’t jump too high or too far on the trampoline at the end. The Mushroom Kingdom is indeed a strange universe.
World 2-2 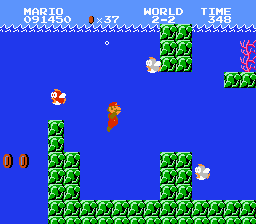 Dat gut.
Mario takes diving lessons, though from the looks of it, he’s already quite the graceful swimmer. I never noticed the animation of his feet while he’s swimming; hilarious and impressive. Bloopers and Cheep-Cheeps make their initial appearance here. Bloopers are the more obnoxious of the two, due to their jerky movements, but the Cheeps’ slow, steady progression incites irritation as well. If you see a chasm, it will try to suck you down. Those coins aren’t worth it anyway.
World 2-3 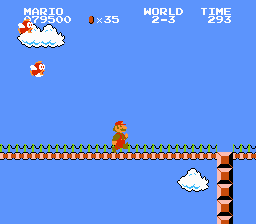 Cheep Cheeps a-go-go
For this stage, heed the advice of Jenny from “Forrest Gump:” “If anything happens (Flying Cheeps kamikaze-ing themselves at you), don’t try to be a hero, ok? You just run, Mario, run.” Yes, you will want to run and make precision jumps over the bridge-like platforms. Thank goodness Mario’s running and jumping skills do, in fact, pay the bills. The Cheeps, try as they might, can’t keep up. And suddenly, he’s at another castle. Another imposter is to come.
World 2-4 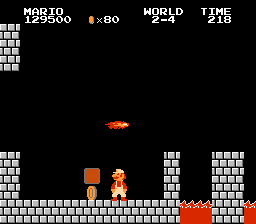 The lava was enough of a threat in the first castle. This go-round, fireballs are shooting out of the lava sporadically. The rotating fireball pillars make a triumphant return, as they will in every castle after this. Tiny pulley-driven platforms emerge just as “Bowser” starts to breathe fire. In the single trickiest part of the game thus far, SMB asks you to jump from the platform over a rotating pillar and Bowser’s fire darts at precisely the right moment. Sure, you could just take the hit, but don’t you want to save your fire flower to see which of Bowser’s minions is pretending to be him? SPOILER: It’s a Koopa.
World 3-1 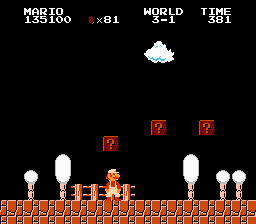 The night stages are my favorites.

The pace at which SMB introduces new enemies and concepts is just right. This is the first night stage, and it’s – dare I scribe it – evocative. That a simple background color change can produce an entirely different feel to what is, essentially, another standard level is a testament to Nintendo’s genius. Please welcome the Hammer Brothers to the game. Their barrage of hammers are sure to annoy, especially when they’re removed from their typical stations. Also, find the vine leading to the bonus area in the sky. It is here where you learn you’re able to run across gaps by holding down the ‘B’ button. So soulful, don’t you agree.
World 3-2 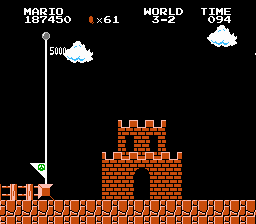 Mario declined to be photographed for this one.
The night motif lingers. Here, there’s a bunch of Koopas and Goombas that need taking out. There’s very little else other than these enemies. That being said, SMB does give you options on how to kill them. Will you use fire, run through the level quickly with the Star provided, or blast a koopa shell to plow through the enemy line? I prefer to have a variety of experiences, so I chose a little of all three.
World 3-3 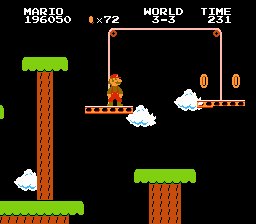 Pulleys on pulleys.
Night time in the forest. Mario weaves through the treetops, encountering the typical foes and a new series of platforms. One levitating platform will sink the moment Mario puts his generous frame atop it, while the other pulley-based platform will balance itself, according to where Mario stands. Accurate physics in an 8-bit game? Here’s the proof. Mario is fat, y’all.
World 3-4 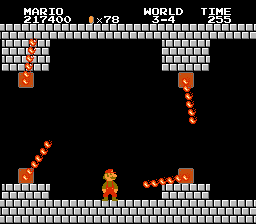 Good thing Mario took gymnastics in high school.
Castle Von Faken Bowser the 3rd. This particular structure is loaded with the rotating fireball pillars. In one section, three sets of pillars are installed both above and below Mario at the least convenient angle: with the fireballs eventually meeting in the middle. Wait until the fireballs aren’t aligned and put your bounce to the ounce. Then, before you encounter Not Bowser, you’ll have to leap over more pillars and his fire spikes. A snarky Toad is your reward. Please Mario, don’t hurt ’em.
World 4-1 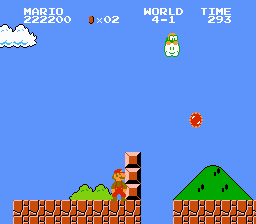 Mario fails to realize that Lakitu’s line of sight is from above, and not directly in front of him.
Lakitu is a bespectacled buttface. He throws out Spinies like tomatoes at a bad speech. Sure, you could leap atop some blocks, wait until he comes close to Mario, and step on him. He’ll be gone for awhile, but he’ll just come back. He always comes back. Run through the level and take the second pipe. It’ll warp you towards the end. Lakitu will be pissed. Mario will be alive, and hopefully, not shrunken.
World 4-2 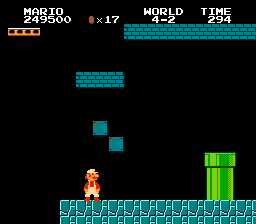 Lead me not into temptation.
Hard to believe this is only the second underground stage so far. Right away you’re asked to make a difficult jump from a sliver of ground. If you’re not good at controlling Mario after the three previous worlds, you soon will be – or die trying. Around the halfway point, you’ll encounter a vine that takes you to a Mushroom Wonderland in the sky. After Mario cavorts on the mushrooms, he’ll find warp zones to worlds 6, 7, and 8. Most people love this feature, and as a kid, I did too. Now I’m not so sure. The warp zones are great for speed runs, but in my opinion, they take away from the joy of playing through the game. But they are optional, so perhaps I’m just an old fusspot.
World 4-3

At last, the Mushroom Kingdom is beginning to live up to its name.
If you chose not to take the warp zone in world 4-2, here is your chance to experience the joys of a Mushroom Wonderland. It’s the same as running through the trees: lots of koopas, platforms and perfectly timed jumps. One thought of note: SMB seems to find the right balance of forcing Mario to barrel through a level, while also appreciating what the developers are doing with said level.
World 4-4 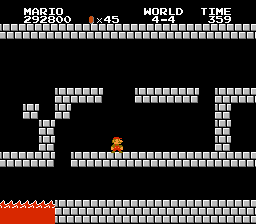 So very tired.
After this castle, Mario’s at the halfway point, baby. Another trip through some fire-infested corridors? Not quite. This castle presents you with multiple routes to take, but only one of these routes is correct. You’ll have to find out which one through trial and error. Taking the wrong route prevents you from moving forward and the timer’s shooting down like it doesn’t want you to live anymore. Be hasty.
TOMORROW: Part 4 will take in Worlds 5-8, and bring this Ultra Hyper Mega Super Mario Bros. Review to a close.
The following two tabs change content below.