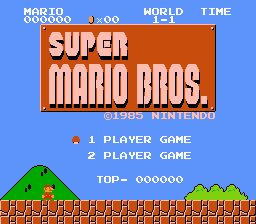 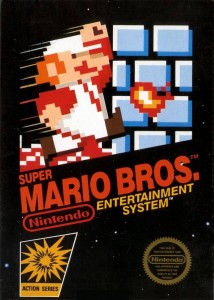 In case you forgot…

World 1-1 or “How Mario Got His Pilot Wings” 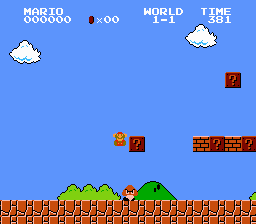 It happens to the best of us.
Mario starts off small and weak. Doubts plague his heart. He shouldn’t be here. This isn’t his world. Eventually, his spirits are buoyed by the jaunty background music (does every area contain music, he wonders) and he moves forward. A Goomba is rolling slowly towards him. He jumps, squashes him, questions if he should feel guilty for having done so, then looks ahead. Blocks with question-mark symbols blink seductively. He can’t resist. Using the force of his mighty noggin, he bumps the three in front of him. Two yield coins, one, a mushroom. He ingests it without thinking. Immediately, he can feel power. He is taller, bigger. He has the desire to run and leap higher than ever before. He runs past two large pipes in the ground, more goombas, then comes to a stop before an open gap. Something feels different about this innocuous area. He jumps absentmindedly. A green mushroom appears out of an invisible block hidden in the ether. He grabs it, feeling ever more confident, and leaps the gap.
Another question-mark block, and this time, his prize is a neon flower. As he touches it, flames emerge from his hands. A Koopa passing by is fried instantly. He chuckles to himself, then runs forward, incinerating any and all impediments, collecting all the items from question-mark blocks. At one point, a star emerges. His body consumes it, and the result is pure energy. Mario runs forward with little regard for anything in front of him. Goomba and Koopas are cut down simply by touching him. Pipes and blocks are no match for his leap. He wants this godlike feeling to last forever. But it ends, and he’s weary.
Mario stands at the foot of a block mountain, wondering what the other side holds. Wanting to rest but more curious than tired, he musters up his strength and climbs to the top. On the other side is a flagpole, and beyond it still, a castle. While he could probably jump directly down and be fine, he decides not to plummet from this high vantage point. He takes a breath and leaps towards the flagpole, higher than ever before. The gently waving flag passes him by. He grasps onto the middle of the flagpole before sliding to the ground. Fireworks go off in the distance as he walks towards the castle, still unsure of what’s happening with the Mushroom Kingdom. Confused but undaunted, he rests in the castle, waiting for his hapless brother Luigi before moving forward.
World 1-2 or “Slow Your Roll” 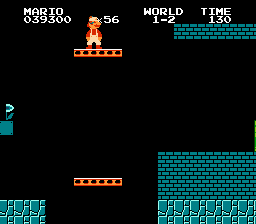 Which road to take…
Haunting blue tones permeate this underground area. There are hidden secrets here, Mario feels, that are greater than those above ground. With these secrets – 1-Up mushrooms, brick blocks filled with coins – come more enemies to protect them. Mario whips up pipin’ hot fire sandwiches for every Goomba and Koopa he sees. The Piranha Plants prove a bit trickier. They only appear every couple seconds before venturing downward into their homes. The underground demands caution, Mario realizes. He can not run and jump with reckless abandon like he could in the overworld. He felt emboldened with power in the previous area, but here, in the underground, he is humbled; his powers, while still useful, are limited by the closed-in environment. As he is sucked upwards by the final pipe, he is grateful for the experience, but wonders about the remaining secrets. Perhaps, at some point, he could return to find more.
World 1-3 or “Nip O’ Courage” 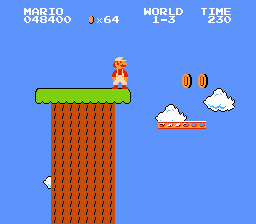 Do you think it’s hard to dye a mustache red?
Mario’s thankful to be breathing fresh air, but this landscape is, once again, different from the two that came before it. The pipe must have shot him out at a high altitude: all he can see are the tops of gigantic trees. He begins to run, then slows. He must be cautious as he jumps among the treetops. Any ill-timed hop could send him careening to the underground and beyond. He moves carefully forward, then comes across two levitating pink platforms. They aren’t moving in sync with each other. Mario can’t wait for them to sync up, so he jumps on one, then the other, barely landing without falling into the ether. He steadies himself, then, high on adrenaline, decides to run as fast as he can through the trees. His jumps are elegant, powerful, and he has more control over them than ever before. He can’t even see the trees or bricks under him as he soars by. Finally, his hands land on a familiar texture – cold, metallic, greasy. He slides downwards on the flagpole, amused by how quickly he arrived. He brushes the sweat off of his brow, feeling like a million lira. Then he notices the large castle directly in front of him. His gut tells him this isn’t a waypoint, like the last castle. Something insidious waits inside.
World 1-4 or “The Imposter” 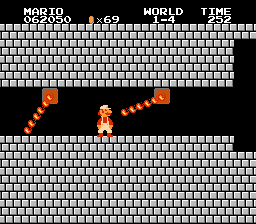 That meatball isn’t particularly spicy, but it will kill you.
The castle is dark, hot, sinister. Mario takes his time walking across the white bricks, absorbing every little detail. Lava seems to undergird the castle structure, which makes little sense. Rotating pillars of flaming balls are placed precariously close to each other within the castle hallways. Certainly they weren’t installed for the owner. Mario bobs and weaves his way through them before coming to a wide open area. Aside from the tense background music, nothing is happening. Then, without warning, a guttural growl emerges from the dark and rectangular bursts of flame speed towards Mario. He jumps over one, but lands on another. It robs him of his flower, his size, and all his strength. More scared than ever, he creeps slowly forward, barely jumping over the approaching flames. The darkness parts and he sees the source of the castle’s evil: a large grinning dragon moving rhythmically before him across a drawbridge. Mario’s shaking, powerless; surely this creature will consume him. At one point, the dragon jumps at the appropriate angle, and Mario sees the axe laying next to the ropes holding up the bridge. An idea forms. Perhaps there is still hope, he thinks. He waits for the creature to jump again, then right as the dragon gains momentum to push off the bridge, Mario runs under him, grabs the axe, cuts the ropes, and watches the creature fall into the fiery pit. Gusts of noxious fumes blow Mario’s hair about his grim, determined face. The ultimate evil is destroyed. The Mushroom Kingdom is safe. All is well.
Mario moves deeper into the castle and finds a young mushroom man. Surely that is the Princesses bodyguard who was captured along with the Princess, he thinks. Delighted to see another person, he runs towards him, eager to meet him and Her Highness. The man sees Mario and says nothing at first. Both men look awkwardly at each other for a moment. “Um,” the man stutters. He then smiles nervously before proclaiming, “Thank you, Mario, but our Princess is in another castle!” Before Mario can punch this toadstool punk square in the pasta fazool, the world goes dark. He feels himself being whisked away to God knows where. He knows his quest is not over. The Mushroom Kingdom is not safe. All is not well. 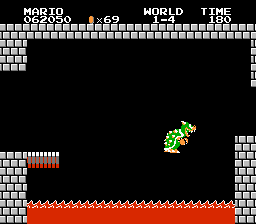 Such a lie.
The following two tabs change content below.