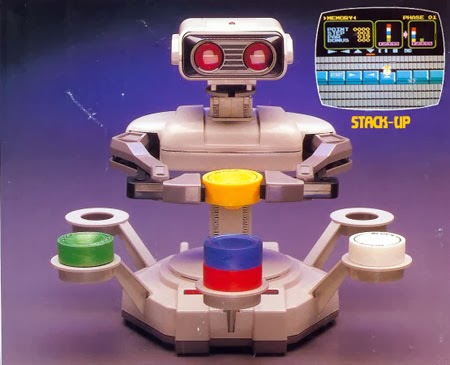 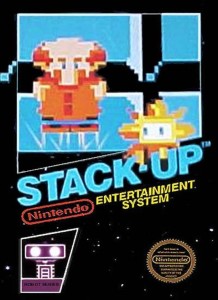 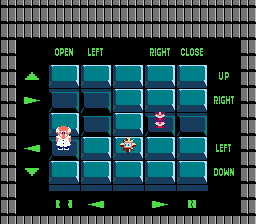 There were moments of cold, there were flashes of light.

Stack-Up is less a game than a half-hearted tech demo for Nintendo’s hardly-used, but much-beloved peripheral, ROB the Robot. Who is ROB, and why did Nintendo care to give him two games? Check out my Gyromite review to discover the reason behind ROB’s existence.
Unlike Gyromite, which could be played with a second player, Stack-Up requires ROB, tentacle-like protrusions that attach to ROB’s sides, and multi-colored discs (the latter two came packed with Stack-Up). Once ROB is fully equipped, choose from one of three gameplay variants: Direct, Memory, and Bingo. In Direct, Professor Hector jumps on buttons to send directional commands to ROB. The goal is to have ROB arrange the colored discs along his tentacles, based on the pattern at the upper right hand corner of the screen. With Memory, the colored discs must again be arranged according to a specific pattern. This time, however, Hector programs ROB’s directional commands before he issues them. One false movement and ROB will spill the discs, bringing great shame to his robot household. Finally, Bingo has Professor Hector coloring out rows of a 5×5 board to issue directional commands to ROB. Colors don’t matter in this variant, only block arrangements. As you’re issuing commands, two bugs named Flipper and Spike will try to undo Hector’s work, either through killing him or deactivating his commands. There’s a second-player option in Bingo, too, where Hector and Vector go head-to-head to see who can stack the most blocks on either side first. If you’ve ever arranged and stacked blocks when you were a kid, that’s pretty much what Stack-Up entails. Only with Stack-Up, you’re forced to use a robot buddy to assist you, which may be a slight against your own block-moving abilities.

Look at him…. He just wants to be useful!!!
ROB’s movements are what I like to call “excitedly slow,” or about as quickly as a snail on holiday. He’s eager to perform the tasks he was programmed for, but God rest him, even his utmost performance is pathetic – by 1985 standards, let alone today. Stack-Up makes ROB the star of the show, but the three mini-games do nothing but highlight his weaknesses. All he does is move discs from one place to another, and he needs Professor Hector’s suddenly superb jumping skills (remember when he couldn’t jump at all in Gyromite?) to even accomplish that. It’s not ROB’s fault that Stack-Up is an accidental display of his uselessness. It’s Nintendo’s fault for making ROB an endearing robot that barely works in spite of himself. A couple years after his debut, ROB was finished, and Super Mario was the star of Nintendo’s show.
STACK-UP: D
ROB’S WORK ETHIC: A-
ROB’S LEGACY: C-
The following two tabs change content below.