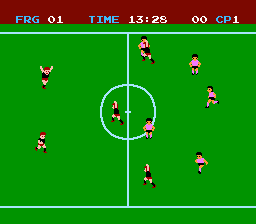 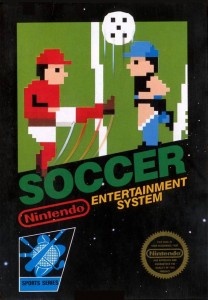 I’m typically a fan of the black box covers, but I can’t say I appreciate this one.

I wasn’t aware skipping was a large part of soccer.

Nintendo’s early sports games for the NES may seem crude today, but it’s a testament to the company’s developing prowess that they’re still playable. Soccer is a stress-free, basic intro to the sport. Choose from a handful of teams (go, Federal Republic of Germany! Give those Easterners what for!), skill level (1-5, with 5 being the toughest), and half-time (15 minutes to 45 minutes, depending on your insatiable lust for soccer). All the teams play the same, so choosing one boils down to what team colors tickle your eyeballs. Don’t bother playing a game on any difficulty setting lower than 3 or the A.I. will win the game for you. Once you’re on the field, you switch players with ‘B’ and hit the soccer ball with ‘A’; controls for sports games often feel more complicated than they need to be, but Soccer gets it right. There are no plays, no field management, no huddled masses yearning to be set free. Hit the ball around the field, kick it in the goal, watch your goofy 8-bit players cheer, then go back for more. The one drawback to Soccer‘s retro simplicity is its sluggishness: all of the players move like they’re knee deep in mud. If you stick with the game, you get used to the pace, but initially, the slow movements can be maddening. Still, for a sports game that just had its twenty-sixth birthday, Soccer gets around pretty well.
B-
The following two tabs change content below.