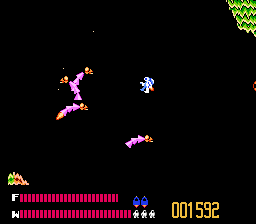 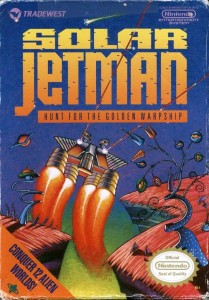 Conquer 12 alien worlds, then Westernize them so that they may know the joy of McDonalds.

Solar Jetman carves its own weird niche on the NES, with little regard for what any player thinks. There’s slight action, a good deal of non-linear exploration, and a little strategy. But what ties these three elements together are the game’s equally impressive and abhorrent physics.
Solar Jetman takes place within the confines of twelve (thirteen, counting the bonus world) planets, each with its own gravity. If a planet has little gravity, your miniature exploring ship/spaceman will bounce around like a pinball; on the plus side, it will be easier to lift essential items out of each planet, like pieces of the golden warship or crystals used for currency, fuel upgrades, etc. Lifting said items requires hovering near the item (a task in an of itself), waiting for the tractor beam to attach to the item, then flying it back to your main ship. If a planet contains more gravity, you have more control of your ship, but forget about lifting anything. Whatever item you attach to on a planet with higher gravity will lower you farther and farther down, unless you fly towards the item with enough momentum and it latches on miraculously.
Two problems with that: 1) if you bounce your ship on the planet’s terrain, your ship will slow down and you’ll likely start to sink; 2) enemies will be shooting at you, and one stray shot can explode your ship, leaving your spaceman out in cold space, unable to pull anything. If the latter happens, your wee jetman can propel up to your main ship and re-generate another exploration ship. But why? Why does Solar Jetman force you to go to such great lengths to accomplish a simple task, like pulling an item out of a cavern? Because Rare wanted to show off their physics “engine.” Take away the physics and this game is revealed as a spartan item-collecting exercise; insert the physics, and the game has substance, depth, and frustration in unequal amounts. Kudos and congratulations to Rare for simulating pseudo-realistic physics on an eight-bit system. Jeers for making Solar Jetman‘s potentially satisfying gameplay rely so heavily on them.
D+
The following two tabs change content below.