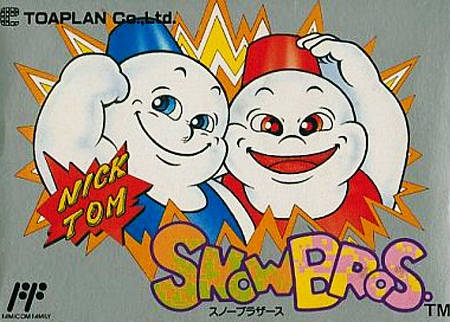 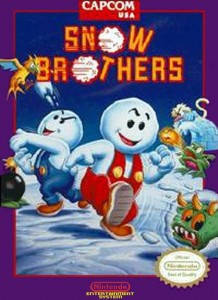 Nick and Tom, you rascals! 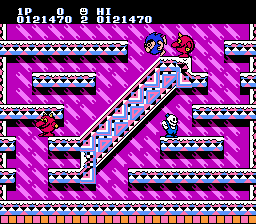 Snow Brothers takes the Bubble Bobble formula – trap enemies in bubbles, pop to kill them – and exchanges bubbles for snow. Prince Nick and Prince Tom are the Snow Brothers (small complaint: no princes would ever be named Nick and Tom – ever), two do-gooders who want to smother the world of evil under a blanket of cleansing white. The evil King Scorch has set before them fifty levels of injustice and, natch, a princess to rescue. Caveman Tornadoes, Yetis, Blue Bats, and more await snow’s purifying touch. Cover each enemy until they’re a fully rounded snowball, then unleash them to their demise. As the large snowball careens around the level, it will hopefully destroy other enemies along with it. After every ten levels, a large reptilian boss creature appears. They’ll spit out enemies you can turn into snowballs, or if you prefer the more methodical approach, you can spew snow at them until they die. Once you understand how to unleash a snowball that takes out almost every enemy on the stage, the levels end quickly – too quickly. Snow Brothers is over fast, thanks to nine continues and little difficulty increase in the later levels; playing with a friend only makes the experience end quicker. A shame, perhaps, but Snow Brothers levels lack the creativity and variety of Bubble Bobble, the very game that inspired it (and I’m not even a huge Bubble Bobble fan). By the time the game ends, you’ll be bored with snow and the brothers who release it.
C+
The following two tabs change content below.