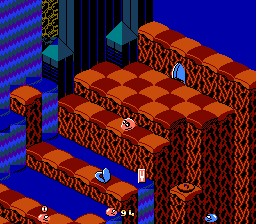 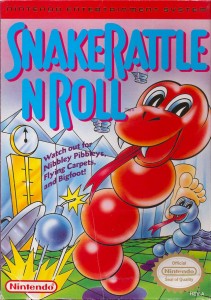 These snakes have herped their last derp.

Now I’ve seen it all.

Kudos to Rare for making a bat-guano crazy Marble Madness sequel that skimps on the marbles in favor of cartoon snakes. You play as Rattle (and Roll, if you bring a friend along), a Snake Head who must re-construct his body in each level. Swallow as many red, blue, and yellow balls as you can to make Rattle a fully functioning snake. Once the tip of Rattle’s tail starts to flicker, you can jump on the scale at the end of the level to open the exit door. The levels have an isometric 3/4 view like Marble Madness, so perish any thoughts of this being a left-to-right platforming affair. Rattle can’t jump very high even when he is fully reformed, so you’ll have to figure out a path to the exit while not falling off of high cliffs or puncturing your soft underbelly. If (when) you use up all your lives, you can continue right at the very point where you died. This sounds gracious of Rare, but Snake, Rattle and Roll gets challenging by the fourth and fifth levels, then bonkers hard to varying degrees for the last five. Rampaging toilet seats, hairy disembodied feet, and snake dozers are some of the main enemies. You can destroy these creatures with your tongue, but if you get hit by anything, you lose one of the pieces of your ball-tastic body. It only takes losing one ball to get your tail to stop flickering, so if you get hit by an enemy guarding the exit, you’ll have to make your way back to the middle to get more balls. Oh, the white hot rage! Despite the stupendous difficulty for the latter half, Snake, Rattle and Roll excels with its bizarre, charming atmosphere. Nowhere else on the NES can you make disembodied feet explode by licking them.
B
The following two tabs change content below.