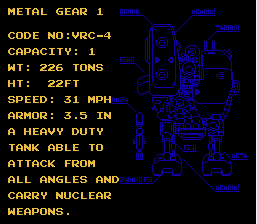 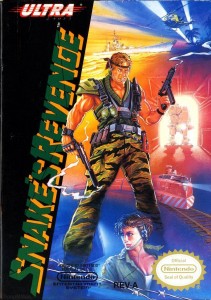 Snake’s got his silencer aimed at the female assassin. 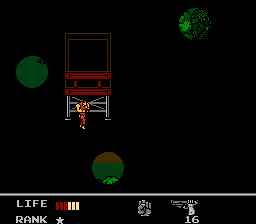 “Metal GEEEEAAAAR?” Well, yes and no. Snake’s Revenge is the unofficial North American/European sequel to the first Metal Gear for the NES, but not only did Hideo Kojima have nothing to do with it, he wasn’t even aware of its presence until one of the game’s developers told him about it (props to Wikipedia). This led Kojima to make his own canonical sequel Metal Gear 2: Solid Snake for the MSX (the more you know!) So where does that leave the Super Mario Bros. 2 of the Metal Gear series? Snake’s Revenge may not be developed by Kojima, but it does a “solid” job at imitating its older brother – which is to say, it’s hard and not very good.
The original Metal Gear involved 8-bit stealth, non-linear progression, and layers of confusion. If one didn’t have an FAQ or an old Nintendo Power laying in front of them, it could be difficult to deduce where you were supposed to go. Snake’s Revenge eases a bit on the confusion. As you progress, there are several different paths to take and different areas are opened up once you acquire certain items and key cards, just like the original. As a whole, though, the map layouts and objectives don’t feel nearly as overwhelming or daunting as the original. What is frustrating are how powerful and numerous the guards are in this game, particularly with their awe-inspiring line of sight. They can’t see behind them or to their side, but if you are barely in front of them at all – even if you’re on the other side of the screen – they see you and they’ll alert more guards. Worse still, the guards will chase you from screen to screen, so unlike the original Metal Gear, you’re no longer safe if you try to run away. Unless you knife their backs on the sly, every encounter you have with the guards will lose you points off of your life bar (don’t rejoice about a life bar – it really doesn’t matter). The guards are everywhere too, which makes progression a very slow and annoying process; you will die a lot en route to accomplishing your objectives, thanks to the guards’ uncanny ability to hit you wherever you move.
Metal Gear and Snake’s Revenge are both unnaturally difficult, but in different ways. Obtuse progression and poor design limit Metal Gear, while the enemies’ superhuman strength dominates Snake’s Revenge. Better to skip ahead to Metal Gear 2: Solid Snake to play what is essentially a 2D Metal Gear Solid and the first Metal Gear game that somewhat captures Kojima’s tripped-out vision of war and humanity.
C
The following two tabs change content below.