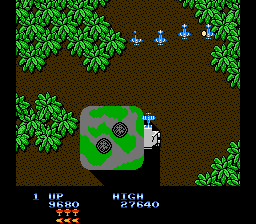 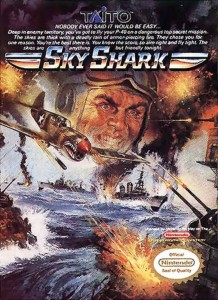 What young child wouldn’t want a game with a terrifying man on the cover? 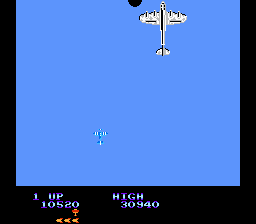 No enemies around, big plane ahead. Everything’s comin’ up Sky Shark!

Would you like to know how difficult Sky Shark is? Five lives, three continues, still not enough to get you through a mere five levels. This old-fashioned shoot-em-up begins as a leisurely stroll through Rip-Off Lane (1942 or 1943 by Capcom come readily to mind), but the game quickly turns into an altered beast of its own. As is the case with most shmups, the goal is to destroy everything that moves. Fighter planes, tanks, mounted artillery, they’re all against you, the most powerful ocean carnivore that’s ever flown in the sky. Your dinky little blue plane can only take one hit before it explodes, so maneuver constantly. All of the enemy’s projectiles look the same: blurry see-through white, which is, incidentally, about the worst color a projectile could be. They blend into the background with incredible ease, and each enemies’ fire rate is quick with little to no pattern. Standard enemies in most early shmups spew out one-to-two projectiles before they’re destroyed. Sky Shark‘s enemies spew out four or five consistently, beginning in the first level. If you kill the special red planes that totally are not in anyway like the red planes from 1942, you’ll get ‘S’ power-ups which increase the amount of bullets you shoot. You can get up to seven bullets at a time, but good luck staying alive long enough to see that point. Bombs are an incredible help for the boss stages, so don’t use them up while you’re fighting the peons. Sky Shark handles fine, and it’s fun enough for a melancholic afternoon, but it’s also heavy on the frustration and light on the memories.
C+
The following two tabs change content below.