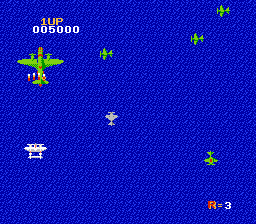 IT’S ALL ABOUT THE RATIONS, BABY 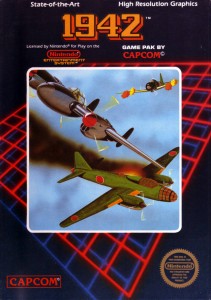 Somewhere Ben Affleck and Josh Hartnett are holding each other.

Once you get those add-ons to your plane, all other countries’ aircraft will figuratively bow before your awesomeness or die in your destructive wake.

My grandpa kicked incredible amounts of butt at the game 1942. As impressive as it is to have a grandfather who excelled at Nintendo games, his greater achievement was being in World War II as a fighter pilot. I’m not sure if he was even eighteen, but at that tumultuous time in history, it hardly mattered. The Nazi’s were getting too big for their sieg heil’s, and the Japanese weren’t going down without an atomic bomb or two. In 1942, it’s unclear as to who you’re battling or whether you’re fighting above a European or Japanese landscape. Green planes, white planes, desert plains, grassy plains, calm blue ocean: in the midst of war, they all blur together.

Of course, one single shoot-em-up couldn’t encompass an entire year of war. The only thing this game could do, on any historical level, was bring my grandpa back to that tumultuous time; a time when the Japanese shot pizza bagels at the Americans; a time when the Americans’ sole source of retaliation were machine guns that shot glorified Nerf pellets; a time when every enemy plane did corkscrews aimlessly, shooting their delicious bagels haphazardly into the air, with hopes that they’d hit you, the most incredible American pilot to ever grace the North Pacific Ocean for 32 levels. I remember asking my grandpa if 1942 was realistic. His response was to smirk and say, “D, it’s scarier than it looks.” I didn’t really know what that meant, but it sure shut me up.