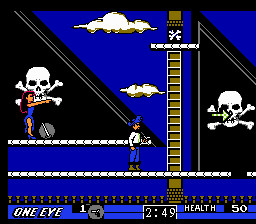 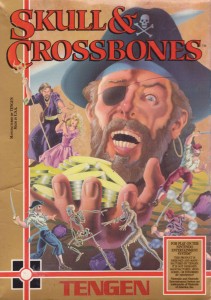 “Yargh, I hate the sea and everything in it!” 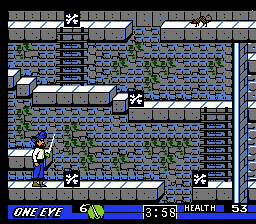 Billowy pantaloons are good for one’s health, according to every 15th century doctor.

After a few years of being employed as a pirate, one could imagine that all the carousing and pillaging would grow tedious. To paraphrase a line Belle sings in Disney’s “Beauty and the Beast,” “There must be more to this pirate-ntial life!” In Skull and Crossbones, your life as a lowly pirate gets jostled to and fro by the kidnapping of a young Princess from an evil Wizard (no names were given, or injured, during the making of this game). The Wizard has not only stolen a beautiful girl, but he’s entranced your fellow mateys against you. Give ’em hell with sword, gun, or knife – as long as you can spare them. For whatever reason, your ammo is dependent upon the number of treasures you find in each pirate realm. The more booty you find, the more ammunition you’ll obtain once you’ve completed the realm. Even if you collect plunder the likes o’ which Blackbeard himself never set eyes upon, you’ll still probably run out of weaponry by the time you reach the boss (in order to reach the boss, you have to kill fifteen of your former mates, which severely limits your ammunition). ‘Tis a silly developmental decision to withhold a pirate’s weaponry, but it doesn’t hinder you, or Skull and Crossbones, completely. Ne’ertheless, once you’ve defeated the Wizard and saved the Princess, there’s not much for a plunderin’ seafarer to do. Best to take the Princess yourself back to the King, and be rewarded for your bravery. Whether you become the next prince or rot in the dungeon for the rest of your years, at least you’re not being forced to drink gallons of rum every day.
C
The following two tabs change content below.