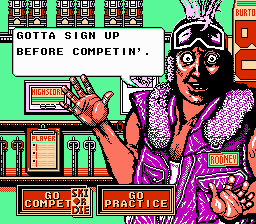 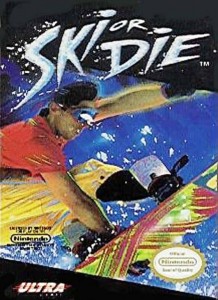 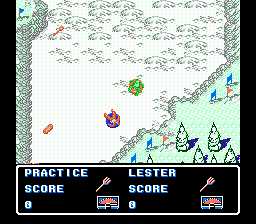 According to Ski or Die, snow melts skaters’ edgy, hardcore exteriors into a warm, child-like playfulness. Free of a need to be “hip” or “with it,” former skaters can now Inner Tube Thrash down a frozen river or engage in an old-fashioned Snowball Fight, just like Mom used to make. If the old skating urges (“must… regain… sense of cool…”) come back, it doesn’t matter: ramps, halfpipes and boards are all covered in snow and ice; a “bummer,” one might say. Thankfully, Konami understands that one does not simply “flip away” from skateboarding easily. Calm the skate shakes by strapping on a snowboard and performing tricks for your Rastafarian teacher. The confusing slogans he shouts at you actually make you perform better, by the way, so refrain from calling him a “prankster” and kicking snow in his face. If you have hopes for Olympic glory and love to be judged by people who couldn’t ski to save their lives, join the Acro Aerial club, where heights are king, landing is queen, and the hopefully high ratings are the fruits of your union. Skiing downhill in Downhill Blitz is the only event reminiscent of skating, in that, you will fall several times and break dozens of bones before you reach the bottom. But four out of five exciting wintery events are better than any amount of skating and/or dying.
B-
The following two tabs change content below.