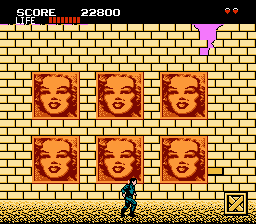 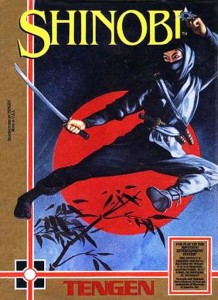 It might say “Shinobi” on the box, but brother, this ain’t Shinobi.

My sprite disappeared behind the scuba enemy, into the nethers of the salmon-colored house.

Shinobi is indeed a Sega-developed game and franchise, so yes, it is strange that any Shinobi title would pop up on the NES. Tengen, the developer of several illegal, unlicensed ports for the NES (including other Sega titles like After Burner), are the ones to blame for its presence. I typically support Tengen’s efforts on the NES (Rolling Thunder in particular), but their Sega ports are visually bland, and they almost always omit features found in the arcade or Master System versions. Shinobi is serviceable, but considering the NES’ hardware limitations, Tengen shouldn’t have bothered.

Yup… whatever you say, Ken Ohio!
In Shinobi, you play Joe Musashi, ninja tough-guy extraordinaire. He throws shurikens, he has cool ninjitsu powers, he slices people with his katana if they get too close to him. He’s a regular Awesome Dude to the Max. But in the NES version, said awesomeness is taken away from him. There’s no katana slicing, no nun-chucks, no grenades, and hardly any powers at all. In fact, if you don’t like throwing shurikens at the same thug templates over and over, you may as well skip this ninja ride. The levels are short and easy, which are two adjectives I never thought I’d associate with Shinobi. Hostages still need to be rescued, but they’re never a bother. The boss battles are tough, but only because they’re cheap and glitchy. Getting caught underneath the helicopter is a recipe for death at the end of stage 2-4, but if you’re behind the helicopter, it can still touch you and you won’t lose any life. Zuh? Shinobi looks washed-out graphically too. None of the characters, including Joe Musashi himself, have discernible features, and the backgrounds are an odd array of textures and colors. It’s enough to make a ninja cry in his ricebowl.

Marilyn Monroe wishes Big Joe luck.
Despite missing features that define Shinobi, I didn’t hate the game. It controls well, and if you squint hard enough, the game still slightly resembles its older, better looking brothers. But just because Shinobi doesn’t inspire feelings of rage or hatred, doesn’t mean it deserves a space in the NES library. It’s a sad, inferior port of a great arcade game.
C-
The following two tabs change content below.