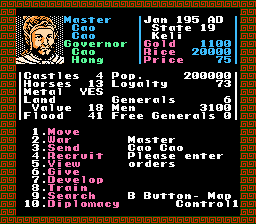 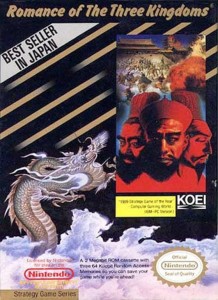 Nobunaga’s Ambition was Koei’s first “Koei” game – tons of history, tons of strategy, statistically overwhelming – but Romance of the Three Kingdoms was their first blockbuster series back in the mid-80s (and it’s still going today – 2012 saw the release of RoTK XII on PS3 and Wii U, albeit in Japan only). Today the neverending Dynasty Warriors series has eclipsed Romance‘s success, but in the 8 and 16-bit days, Romance was the series that gamers associated with Koei. But why Romance and not L’Empereur or Aerobiz or even Nobunaga’s Ambition?
Theories abound, and I have one of my own. As most long-time readers know,I admire the Koei formula, but have never been able to get into their games. I’ve browsed through textbook length FAQs, read manuals, and spent hours trying to indulge my historical urges – yet I always walk away feeling lost. This was not the case with Romance of the Three Kingdoms. As with all Koei games, there’s still a great deal of trial-and-error involved, but unlike the majority of Koei games, said trial-and-error actually results in accomplishments, not pure frustration.
In Romance, you have one main task: expand your empire while keeping your people happy. Build up your soldiers (your army) and your rice (their food)before you even consider combat. Most neighboring states have a significant amount of soldiers guarding their territory, so you don’t want to run in unprepared. Once engaged in combat, consider your terrain, whether to defend or attack, and whether to split up your units or stay together; each battle calls for different tactics. Combat ends when the enemy has taken all of your rice, or you have taken over their castles. Occasionally, storms or locusts will swoop in to destroy your crops. There’s not much you can do about either of these natural disasters, but pray they don’t destroy too much. You can choose from several “unique”scenarios on the main menu, but the only difference between any of them is the in-game placement of the kingdoms. In other words, it doesn’t matter whether you’re steeped in the essence of Cao Cao or engaged in the Battle of Red Wall: the essence of Romance is to conquer new territories while maintaining your people’s morale. It’s the most direct and enjoyable Koei game I’ve yet to play.
Whether Koei intended it or not, Romance of the Three Kingdoms is a gateway drug for the rest of their library. The deeper you delve into the game, the more complex it is, yet for casual strategy fans like myself, it’s not as overwhelming as other Koei titles. However, now that I’ve gotten a taste for the Koei formula, I’m questioning my previous judgments on their other games. Were they really as obtuse as I believed at the time, or did I just need to play the right title to expand my mind? Only by re-visiting them will I get my answer. I can honestly say, Romance might be my first step to becoming a Koei fan. I never thought I’d see the day.
B+
The following two tabs change content below.