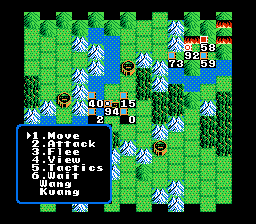 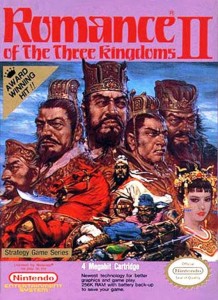 Don’t screw it up, Wang Kuang

Recruit generals, spy on neighboring provinces, train soldiers, make alliances, go to war: a filthy year’s worth of work in Romance of the Three Kingdoms II. The original Rot3k is, perhaps, the best introduction to Koei’s gaggle of historical simulations. There’s enough content to please the hardcore Koei fans, yet it has a rare introductory curve that’s perfect for potentially overwhelmed players. Romance II is slightly more difficult. It maintains the first game’s balancing act – go to war and battle for other generals’ territories, while keeping the homefront strengthened – while introducing a wider variety of menu options for you to pore over –Diplomacy! Internal Affairs!The new options add more meat to an already beefy game, and as if that weren’t enough, you now have the ability to create custom characters.The characters can be placed in unoccupied provinces for an additional challenge, or you can play as one yourself.Until you get good at the game, I’d avoid them altogether. If you play as a custom character, you have to start with bare bones amount of goods: little rice, little gold, no extra generals; not the ideal setting for newcomers.The goal, in all of the scenarios, is to conquer all of China. The soldiers’ and peoples’ morale is still important (if you don’t keep them happy, they might riot), but it‘s not a top priority like it was in the first game.Like the majority of Koei games, if you don’t have a manual or FAQ to consult, start a new game and mess around. Once you understand combat (basically the same as the first game) among the other options, get to conquering China. Remember: a winning smile is as important as an iron fist.
A-
The following two tabs change content below.