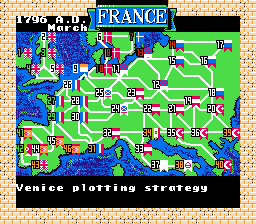 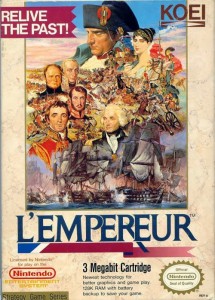 Relive the past! That is NOT a request, private!

Plot a snooty French boot up your rear, Venice.

Then again, who wouldn’t want to play as Napoleon and run around conquering countries, all with a smug smirk on your face and a glass of wine in your hand? Sounds fun, until you realize L’Empereur is a Koei game and you’ll have to devote an entire work week just to figure out what you’re supposed to do (the instruction manual is about as useful as a clogged artery). If you have the patience of a thousand suns and soak up history like so many ultraviolet rays, then L’Empereur will be right up your blood-soaked alley.
Let it be said that Koei never seeks to rob you from your almost-worthless dollars. The amount of content in this small gray cartridge would overwhelm even the gamers of today. Four scenarios, each one chronicling different aspect of Napoleon’s war career, are at your disposal. From what I gathered, each scenario is self-contained. They all have the same map, but different countries will own different cities, depending on the scenario. You have several different options in each scenario, like invading a city, managing your army, investing in different cities commerce, agriculture etc. The list of options you have is overwhelming, and if that isn’t enough, how about some stats for each city! The stat screen is an enormous, confusing cluster-chunk of information. Unless you can read the minds of Koei programmers, I’d suggest consulting a big FAQ. As a matter of fact, why don’t you do that for the entire game? The manual will let you know the goals for each scenario, but it’s up to you to take this game deeper. It’s not like you have any other choice.
I have a strange fascination with Koei games. One day, I think I’m gonna meet the one; the one that’s going to hit that historical sweet spot and offer up some decent beginner strategy that’s easy to understand and enjoy. Until then, I’m content to sit on the sidelines and stare at the Koei library in contemplation. I know they’re good games. I know a lot of old-school gamers swear by them. But so help me, I can’t begin to care less about trying to wrap my brain around them.
K (for Koei)
The following two tabs change content below.