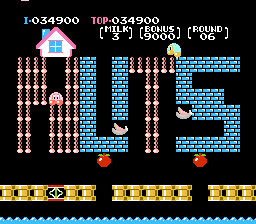 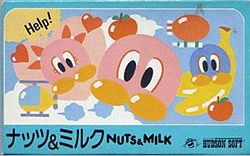 According to Wikipedia, this was the first third-party game to be released on the Famicom. Interesting, if true.

The combination of nuts and milk is downright ridiculous. What kind of snack do you want to eat with milk? That’s right, soft, delicious chocolate chip cookies, or some variant thereof (PRO TIP: take three fresh-out-da-oven chocolate chip cookies, stuff ’em in a heaping glass of milk, and blend it to create a chocolatey, crumbly sludge beverage). Nuts go with soda or beer. End of story, Hudson Soft. Unfortunately, I’m about thirty years too late to convince them to change the title. Nuts and Milk and whatever that entails… forever.
Nuts and Milk is a simple, strange arcade game that is, unfortunately, remembered more for its ridiculous title than its amusing gameplay. You star as Milk, a pink mushroom creature who has to rescue his fiancée from the treacherous grasp of Nuts and his evil blimps (yes, Nuts and Milk was only released in Japan). Collect pieces of fruit strewn about to open the path to Milk’s beloved, and progress to the next level. The level design is simple, clean, and colorful. Ropes, pipes, and bricks are the main ingredients used to construct each level, and nothing – not the fruit or the bouncing platforms or even Nuts himself – is out of place. Avoiding Nuts in each level isn’t too great a task. He copies your moves verbatim or simply chases you outright, but thankfully, he’s a lot dumber than you. If you’re on the opposite side of a chasm, Nuts will not use the bouncing platform to jump over the chasm and kill you. He’ll jump towards you and fall right into the chasm; this is one of several examples of Nuts’ idiocy. Unfortunately for Milk, Nuts always regenerates after he dies, and often in an area near fruit. Don’t neglect his persistence and always find his regeneration spot; the latter is different in every level. Collecting fruit, avoiding Nuts (or sometimes Nutses), and rescuing your bride-to-be. It’s a shame that Hudson Soft or Nintendo failed to see this game’s potential outside Japan. Nuts and Milk is a gentle, whimsical game that would have found an appreciative audience in the States.
B+
The following two tabs change content below.