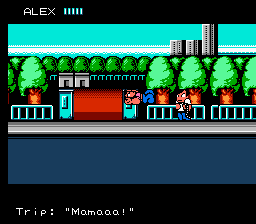 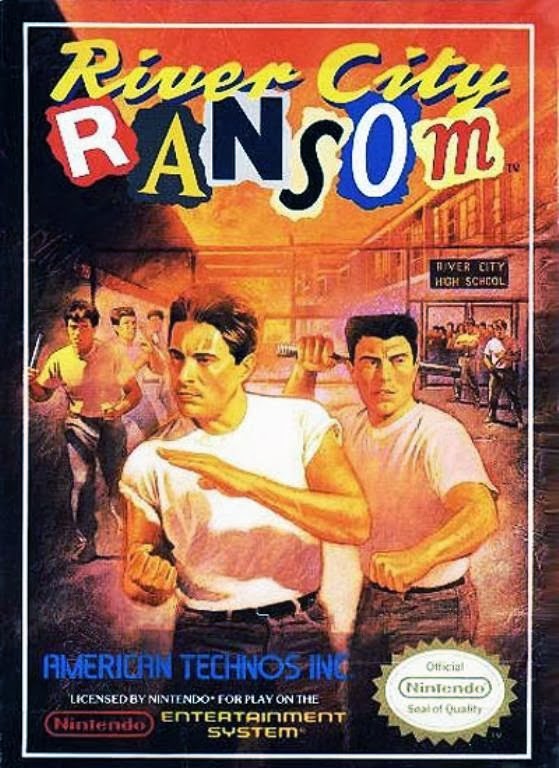 Not all American gamers want to see American bros on a Japanese brawler, Technos.

Alex and Ryan are your average high school students. They love gel in their hair, girls under their arms, and working out. But when their laid back lifestyle is threatened by every gang, street tough, preppy, international hooligan, and frat boy in River City, their calling is clear: fight, eat, read, level up, then fight some more, until the River City streets are clean.
River City Ransom takes Technos’ adorably blocky characters and plunges them into a big-city brawler with light RPG elements. This before-its-time genre fusion makes RCR the most unique, personality-driven, and arguably best, beat-em-up on the NES. Select Alex or Ryan and commence punching and kicking the droves of multicolored shirt-wearing fools that launch themselves at you. Your main beat-down tools are your fists and legs, but there are plenty of weapons to pick up off the ground: rocks, chains, trash-cans, lead pipes, and more are at yours and the gangs’ disposal. When a thug gets defeated, they’ll drop a coin amount of varying value. If the thug is in a more powerful gang, like the Internationals (they think they’re so hot with their dark green wife beaters), you’ll gain $1.25 per thug dropped; but if the thug is just a Generic Dude in a light blue tee, you won’t gain more than fifty cents. Money is incredibly important to your progression. Throughout River City, there are shopping strips where you can purchase food and drink to replenish your health and boost your stats. You can also purchase fighting techniques, and other miscellaneous books or items that will upgrade your stats. You have unlimited lives, but each time you die, the thugs steal a chunk of your money and you wake up at the nearest shopping strip. Pummel your way through several bosses until you gain access to River City High School. Once there, you can take on Slick. Beat him and put order to chaos. 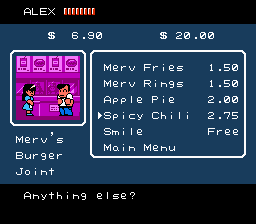 In the twenty-three years since River City Ransom was released, I have yet to play a beat-em-up that is as distinct or ground-breaking. If RCR were put out on current systems as an indie game today, it would be hailed as a tour-de-force of imagination and game design. It’s a shame that the game has never received a direct sequel (and not for lack of trying), but it’s only been in the last fifteen years that River City Ransom has been shown the respect it deserves.It surpasses Double Dragon II as Technos’ best beat-em-up, and sets the standard by which all future brawlers will be judged. No pressure or anything.