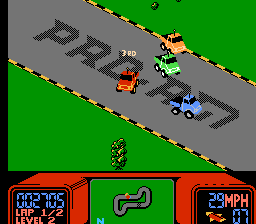 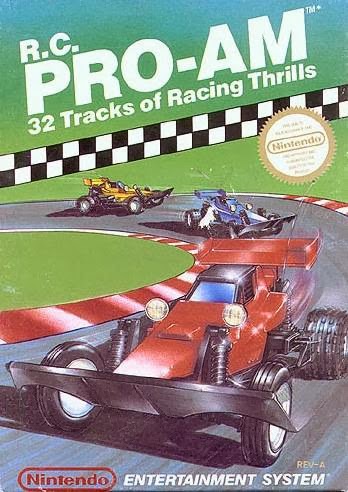 These cars look more like trucks in the actual game. WHICH IS IT, RARE?! 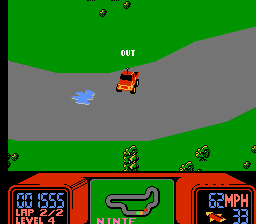 These remote-controlled compensator trucks came to win! Or so they informed me, as they were knocking my own truck back and forth between themselves, like a swinging pair of rocky mountain oysters. R.C. Pro-Am might look like an adorable miniaturized racing game, but it’s more brutal than any racer on the NES. Each of the thirty-two tracks is curvy and tightly packed with three opponents, oil slicks, water spills, weaponry, and upgrades. Weapons include missiles and bombs, upgrades include accelerators, engines (for more speed), and tires (turning abilities). Each race moves so fast, however, that you may as well just pick up anything you see. If you can, watch out for the skulls, as they will take away one weapon charge. Shields are your best friend. Get one and let its multi-colored brilliance bounce your opponents away from you. Also, if you want to have any hope of progression, you need to collect letters on the track that spell N-I-N-T-E-N-D-O. Do so, and your truck will upgrade into a faster, better handling beast. There’s one letter per track, so if you collected them all, you could upgrade your truck a few times. Your fellow compensators upgrade with you, so keep that in mind. You didn’t think they’d let your diesel beauty look better than theirs’, did ya?
In many ways, R.C. Pro-Am feels like a predecessor to Super Mario Kart. On the surface, it’s lighthearted and fun, with the weapons and upgrades adding considerable depth. Learning the course layouts, collecting the letters, and figuring out how to control your wee truck will ensure you survive. Getting the gold in each course adds considerable replay value. Perhaps the game’s only flaw is its lack of a two-player mode, but the sequel more than made up for that. R.C. Pro-Am stands the test of time, and adds considerable value to the NES’ relatively weak library of racers.
A-
The following two tabs change content below.